Everyone Connects is where the youth demonstrate the power of connecting, communicating and collaborating, fortifying the belief that connections make anything possible. If one day I’m disconnected, I will be dead boring! 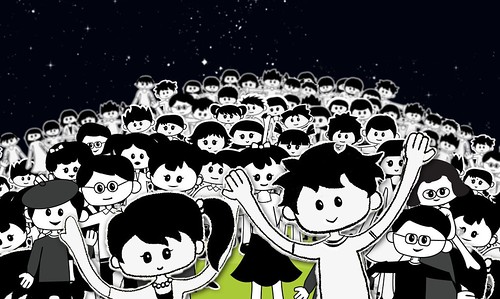 Still remember this advertisement? Yeah I do… It’s very cute ads and the song which featured an animation of a guy made of paper helped by his human colleagues to get across to another building to meet his newfound love, a girl made of paper as well. The song still looping just like playing besides my ear… Nice right?

Last year “Everyone Connects (EC)” with bunkface. The song – Through My Window was introduced to the public via the delivery of unmarked envelopes to the media, which only contained a CD with a very, very infectious song, titled ‘Through My Window’.

Everyone was asking the same thing – what is it about, who’s behind it? There were lots of guesses. Fast forward to a week later, it was revealed that the song, which set the whole nation abuzz was sung by local band – Bunkface.

First it was a song. Now, it’s even more! Let’s come and celebrate the first birthday with a world of adventure just waiting for you to experience. Be prepared for the fun! Do come and join me with your friends and we get to connects together!

Are you connected? Come let’s enjoy yourself and check out what’s the surprise at EC Birthday Bash this coming Sunday @ The Curve. There’ll be loads of fun with Bunkface, Summer ash and tons of games and excitement. Many prizes to be won too!