I recently just got my Kia Forte 1.6 ECU problem fixed. What’s ECU? It’s Engine Control Unit. How to know your Kia Forte got ECU problem? For my car, the auto transmission got stuck in 3rd gear and won’t shift. I was actually driving to work and I was like, “W..T..F!!! Ape ni?” To cut my grandmother story short, I repair my Kia Forte ECU and I was very fortunate coz I got a deal from a workshop specializing in repairing Kia Forte ECU issues which save me a lot coz a new replacement unit can easily cost RM3-4k. Why my Kia Forte gearbox stuck at 3rd Gear? Why my Kia Forte cannot start? Why is there an error code : shift solenoid appearing on my Kia Forte? When your car has any one of the above issues, it’s most likely that your Kia Forte ECU is faulty and the next step is to find a solution. Symptoms of Faulty ECU for Kia Forte -Car cannot start or hard to start -Auto transmission in limp mode, stuck in certain gear and won’t shift -Loss of communication between the ECU and the Scanner -Trouble Code : Shift Solenoid How to solve Kia Forte ECU problem? Purchase a new replacement unit which can cost about RM3-4k Repair / Reprogram which only cost about RM880. In short, there are just two ways to fix your Kia Forte ECU problem. It’s either you REPLACE or REPAIR. To replace a new unit is very expensive. I chose to repair coz it’s more budget friendly and the cost of repairing is just ¼ of the cost to replace a new unit. Here’s a piece of good news for Kia Forte owners :- As I said earlier, I manage to repair my Kia Forte ECU problem at a good price. The nice people at this workshop is willing to offer the same good price to repair ECU for all my readers. So if you want to fix / repair / reprogram your Kia Forte ECU at a very very good price, fill up your details here. Or if you have any questions, do PM me. I won’t bite 🙂...

Are you a football fan? If you are, then surely this piece of news will excite you. Kia Motors, the official partner of the FIFA World Cup, is giving you a chance to win tickets to Brazil to watch the 2014 FIFA World Cup. Excited already? Test Drive KIA On Tour 2014 @ The Curve To stand a chance of winning the tickets to the 2014 FIFA World Cup, just visit the ‘Test Drive Kia On Tour’ roadshow at selected venues, test drive any Kia and you’ll get a lucky draw coupon to win the trip to Brazil. If you like the car and decided to make a booking at the roadshow, you get two lucky draw coupons to win a fully paid trip to watch the 2014 FIFA World Cup in Brazil. Among the Kia car models available at the KIA ON TOUR Roadshow are Optima K5, Sportage, Cerato and Picanto. The Roadshow is pretty happening; there are on ground games, test drive session and KIA Models showcase. Existing KIA owners will receive RM50 cash vouchers on the spot for purchase of spare parts. They are also giving away freebies if you like KIA Facebook Page or follow KIA on Instagram 🙂 I took the opportunity to test drive the Kia Cerato when I visited the ‘Test Drive KIA ON TOUR’ Roadshow at The Curve, Damansara last week. Kia Cerato is the successor of the highly successful Forte. FYI, I’m currently driving KIA Forte and I’m loving it! Test Drive KIA On Tour @ KIA Cerato I test drive the 2.0L variant which comes with leather seats, making them very comfortable to sit in. The driver’s seat is even equipped with vents that cool or warm the seat. Really comfy! Do you know that the Cerato’s steering comes in three settings – Comfort, Normal and Sport – that can be chosen according to your driving needs. Cool feature! I was given a lucky draw coupon after the test drive. Quickly fill up the coupon with my details and deposit it to the box at the roadshow. If Lady Luck is on my side, I’ll be flying to Brazil to watch the 2014 FIFA World Cup 😉 The roadshow starts in Queensbay Mall, Centre Court from 6th to 9th March 2014 then to The Curve, Centre Court from 13th... I recently just got my Kia Forte 1.6 ECU problem fixed. What’s ECU? It’s Engine Control Unit. How to know your Kia Forte got ECU problem? For my car, the auto transmission got stuck in 3rd gear and won’t shift. I was actually driving to work and I was like, “W..T..F!!! Ape ni?” To cut my grandmother story short, I repair my Kia Forte ECU and I was very fortunate coz I got a deal from a workshop specializing in repairing Kia Forte ECU...

Naza Kia Malaysia has recently just launched the all-new 2013 Kia Cerato! The new Cerato will be available in two variants: 1.6-litre Gamma II MPI and a 2.0-litre NU MPI. Anyone interested to get Kia Cerato with special deal? Let me know! #kia #cerato #car #offer from saimatkong Both of the variations are mated to a 6-speed automatic with paddle shifters. The 2013 Kia Cerato are priced from RM99,888 for 1.6L and RM118,888 for 2.0L.... 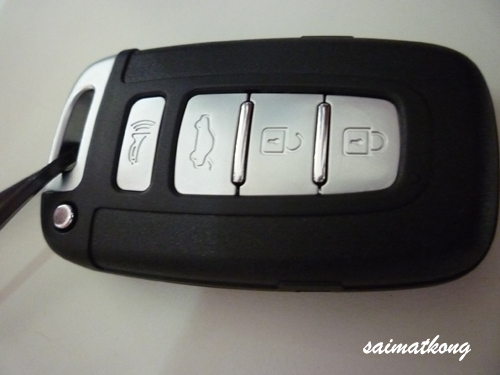 Have you test drive this Korean Kia Forte? If not pls head to your nearest Naza or KIA Motor showroom now before you even say that, “KIA wor… Why buy KIA?” “KIA good meh?” “KIA got resell value meh?” “KIA spare part expensive right?” etc… For me I think this New NAZA KIA Forte will change entire perception about Korean car, hence next time you will not see ppl mention any... 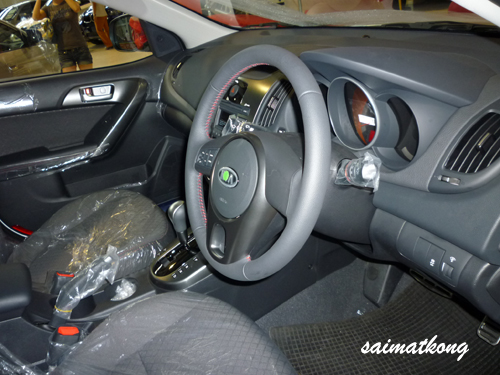 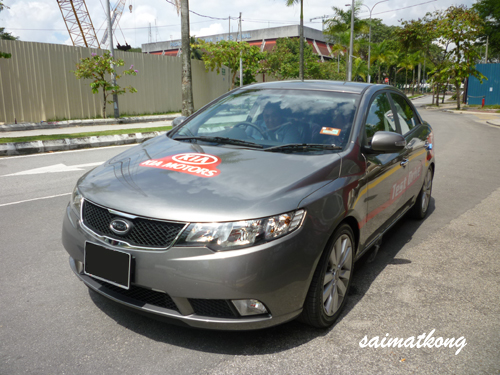 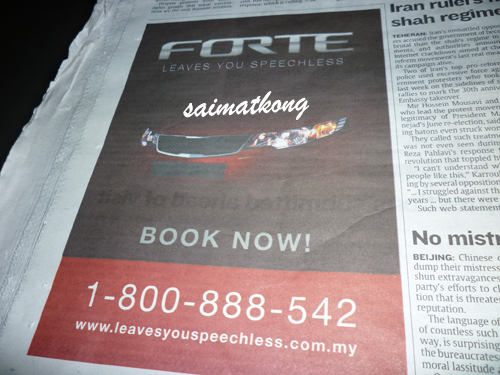 NAZA KIA FORTE – Leves you speechless? Book now! Haha. http://www.forte.my/ Even it’s compared against Mazda 3, Mitsubishi Lancer, Honda Civic / Honda City Is this similar to KIA CERATO? How much will it be if it’s launch in Malaysia merely in 7 days time. I find that this car has the similar design and out look to the Mitsubishi Lancer or Honda City. What say you? Will you get this car if it’s about RM60...