PIKOM PC Fair 2008 (II) is coming in August 2008, which is tomorrow. It is the second PC Fair of the year. Check out the 1st Pikom PC Fair of the year. I went to PC Fair since few years back till now, every time there’s PC Fair I will sure go and have a visit no matter I have anything in mind to purchase or not.

But for me, I still like PC Fair in PWTC better, because the KLCC PC Fair really badly manage for the past few times, all one way straight and if you decide to go out or halfway, you can’t! That’s the main problem, besides jam, crowded, expensive food, expensive car parking fees etc. 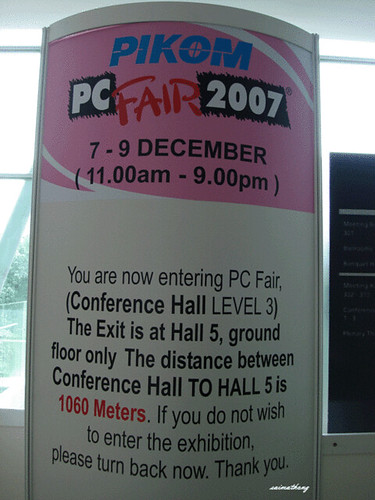 This was last year Pikom PC Fair Banner, it’s stated there “The Exit is at Hall 5, ground floor only. The distance between Conference Hall To Hall 5 is 1060 Meters. If you do not wish to enter the exhibition, please turn back now. Thank you.” This show how arrogant are they.

Get a 160GB Western Digital My Passport Essential or an Imation Apollo portable Hardisk (HDD), free when you subscribe to PC.Com @ only RM158

*Only original form from PC.Com magazine will be entertained. (So get your form ready!)
*100 subscribers per day. First come first serve basis. While stocks last. Terms & conditions apply.

This time HWM offer is not so attractive as compared to the last pc fair.

Which day to go PC Fair is the best and can get the best deal?

First day can go and collect all the broucher & price list. If you want to subscribe magazine and get wonderful free gift, also need to subscribe on 1st day itself (their expensive free gift will giving very fast, sometimes can get a WIFI Router, DVD Burner, Speaker)

Second day can go there and get those selling fast goods.

Third day can go sapu all the cheap deal products and sometimes they throw the price, they will not want to bring back all the products and what they want is just cash$$

Good luck in getting good deal =)

If you don’t wish to buy anything and want to make money, you may find some part time job for this PC Fair too, just apply to be a Promoter or flyer distributer, you able to get around RM80-200 per day plus free lunch and dinner meals maybe, besides that, if you are a pretty women, you can get the salary up to RM200 a day just to hold notebook or mp3 players or other products and the cash is yours $$, good? Source for part time job now and hope it’s not too late =)