No more petrol price increase in this year? I heard in August they will increase to RM4?? Is this for sure not increasing? or a lie?

Just like they say will not increase but after one day, announce totally different thing? Will you believe or can u believe no more petrol price increase?? Personally I don’t. Just prepared yourself for the increase I would say. Or maybe they keep their word and it will increase on the 1st day of 2009. 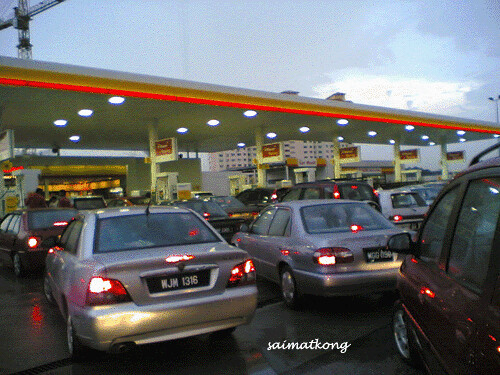 Who can garuntee this would not ever happen again?

PUTRAJAYA: There will be no further increase to the price of fuel in the country this year despite the possibility of the global price of oil reaching US$200 (RM660) per barrel, the Prime Minister said.

This latest decision by the Cabinet came on top of various measures announced on Monday to help the Government cut costs and channel more subsidies to low income earners.

Datuk Seri Abdullah Ahmad Badawi said to stem any more increase, the Government would have to think of alternative ways to finance its spending.

“If that is the decision of the Cabinet, this will remain so despite further jumps to the global price of oil.

“In fact, the price of oil is expected to remain at high levels in the months to come. The high price of oil means that the market price of petrol at the pumps have now reached RM3.45 per litre,” he said, adding that the price should be reviewed to RM3.15 per litre instead of RM2.70 beginning next month.

“However, the Government realises that the rakyat (citizens) are still trying to adapt themselves to higher petrol prices. The Cabinet has thus decided there will be no more increase this year,” he told reporters at his office here on Wednesday.

If the global price of petrol should ever drop, Abdullah said the Government would make the necessary adjustments with the 30 sen discount still being given.

In the June 4 announcement of the new petrol price, Abdullah had said that prices at the petrol pump would be adjusted monthly to reflect global market price.

The Premier also said that in the National Inflation Council meeting on Monday, it had been decided that the over one million civil servants would now be paid their monthly salaries in two instalments, staring in August.

“The first instalment will be paid in the middle of the month while the second will be at the end of the month.

“Any income tax, Employees’ Provident Fund or others will be deducted from the second instalment,” he said.

PUTRAJAYA: Against a backdrop of anger and frustration as the people come to grips with the new high prices for fuel, the cabinet yesterday decided that there will no further price hikes this year to allow the people time to adjust to to the situation.

Prime Minister Datuk Seri Abdullah Ahmad Badawi said the government is aware of the consequences should the price rocket upwards in the world market, but it will maintain its decision and find other means to bear the additional expenses.

On June 4, the government had decided that subsidy for petrol be fixed at 30 sen per litre, and that there would be a monthly review based on world prices.

“However, the price on the world market increased drastically to more than USD130 per barrel on June 8 and is expected to be higher in the coming months,” Abdullah said.

“This resulted in petrol price in the local market increasing to RM3.45 per litre. If the government were to implement the 30 sen subsidy, the price of petrol would have to be raised from RM2.70 to RM3.15 per litre next month.”

Although the 30-sen buffer will not be used for the rest of the year should crude prices rise further, he said it will be used if world prices drop. This would cause the present pump prices to drop.

Abdullah assured that the government is “thinking of all kinds of additional measures because we know the price increase is high and everyone, including the government, is facing difficulties, not only the people”.

Asked whether the government’s revenue will be affected by the decision, he said: “Since the price of petrol has increased, we could hope to get additional revenue from Petronas.”

At the press conference, Abdullah also announced another move to help civil servants better manage their household expenses and cash flow — their salary will be paid in two instalments effective August.

Asked whether he would recommend the private sector do the same, he said: “I see this as a good move to help our workers manage their household cash flow better.”