Anonymous, the hacker group that has threatened to attack the Malaysian Government portal, just announced its reasons. The “Anonymous” group is acting against what it claims are various acts of censorship by the Malaysian Government which announced last week, and also because of the recent move to block filesharing sites, like The Pirate Bay, MegaUpload, in Malaysia. 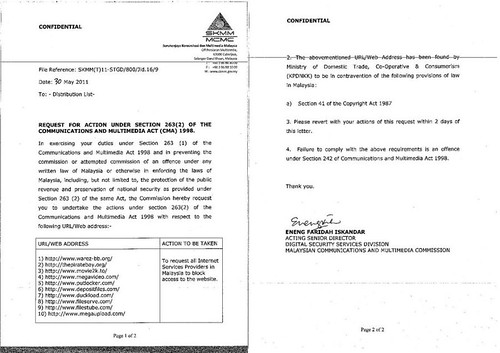 Malaysian government is ordering the ISPs in the country to block many file sharing websites including The Pirate Bay and MegaUpload. The decision to block the websites is taken by the Suruhanjaya Komunikasi dan Multimedia Malaysia (SKMM) – the arm of the Malaysian government which supervises the telecom and multimedia industry in Malaysia.

According to memo sent by the SKMM to the Malaysian ISPs, file sharing websites are in violation of Section 41 of the Copyright Act of 1987. The SKMM is, therefore, ordering the ISPs to block access to those websites under Section 263 (1) and 263 (2) of the Communication and Multimedia Act of 1998.

All service providers have been ordered to completely block various file-sharing sites including The Pirate Bay, MegaVideo and other hosting services. The move follows an April statement by the Prime Minister in which promised that would never censor the Internet.

If your favourite file sharing sites seemed to be inaccessible for the past few days, it’s most probably blocked! The file sharing sites might have been listed under the recent blockage order by the Malaysian Communications and Multimedia Commission (MCMC). 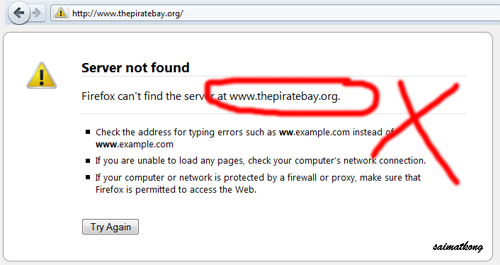 Greetings, Malaysia, We have seen the censorship taken by the Malaysian government, blocking sites like The Pirate Bay, and WikiLeaks. Malaysia is one of the world’s strictest governments, even blocking out movies, and television shows. These acts of censorship are inexcusable. You are taking away a basic human right. The internet is here for freedom, without fear of government interference. Do not think that no one else notices. Your structured government has done the talking, and we hear loud and clear. Let this be an announcement to all your people. This is a sign, a warning, and an opportunity to listen to ideas above your own. In a way you are being stubborn. But how will this help anyone or your country. We fear that if you make further decisions to take away human freedom. We are obligated to act fast and have no mercy. For rules were meant to be broken. And corruption was meant to be washed away and forgiven. Now we will wash your corruption away so be prepared. Take this as a favor. 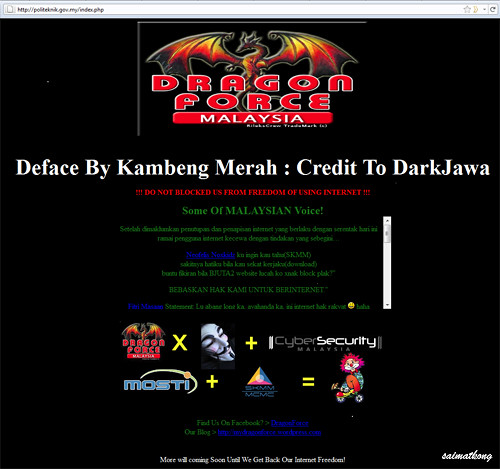 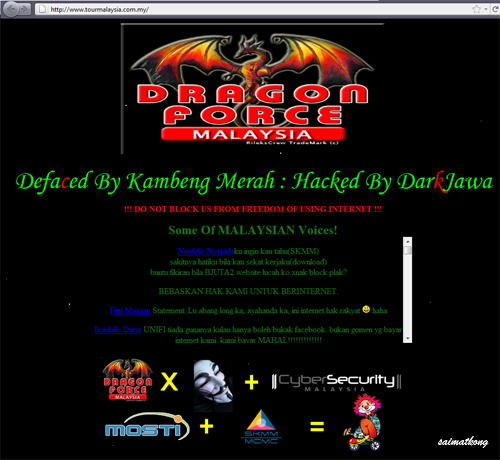 Ohh no! Is this good or bad? Even this file sharing sites are blocked, there’s always way to bypass it! People will come out will guide on “How to bypass DNS block” or “How to access blocked file share websites” to help internet users to get around it. Just some simple DNS bypass will do the trick or just find some new file sharing website that offering the same service? How about other file sharing site like dropbox and box.net etc?

Are you one of the affected internet user by the block of fileshare website? I’m not as I don’t download much but was affected by the online streaming of TVB drama series as most of the latest drama series do not available for Malaysia anymore! Fear not of coz I have my own way to by pass and to grab the content and continue streaming of PPS.tv or Tudou.

Updates! Attack on govt website will be prevented, says Rais

Sure? Will see when the time come 7.30pm GMT on Wednesday 15th June (3.30am Thursday Malaysian time)! Do check out www.malaysia.gov.my Malaysia Government Portal that was targeted to be hacked and see whether the government can prevent the hack or not by Anonymous, the hacker group! I’m hoping to see that how strong our Malaysian Government system is!

PETALING JAYA: A hacker group has threatened to attack the www.malaysia.gov.my website.

The group, which calls itself Anonymous, said it will launch the attack at 7.30pm GMT on Wednesday (3.30am Thursday Malaysian time) and has named it “Operation Malaysia.”

It posted the threat in a graphic on this website, http://i.imgur.com/PTFWh.png.

Mikko Hypponen, chief research officer at the F-Secure Corporation – a computer security software company based in Helsinki , Finland – tweeted about the threat at 4.42am Malaysian time.

No other details were available at this time. It is also not known why Anonymous has targeted the Malaysian website.

But there has been an uptick in “hacktivism” these past weeks, where hacker groups have targeted various organisations for political purposes.

Hackers have attacked the International Monetary Fund and Sony PlayStation Network, as well as the networks of aeronautics company Lockheed Martin Corp and Citibank in North America, amongst others.

Anonymous was blamed for the hack into the PlayStation network but a spokesman for the group has denied involvement, saying that its aims are political. Spain, however, has arrested three suspected members of the hacker group for that attack.

Anonymous apparently comprises a vast number of hackers in various countries, who have been organised into cells that share common goals. They operate anonymously but in a co-ordinated fashion.

Meanwhile the AP reported from New York that a group of hackers has gained access to the websites of the U.S. Senate and video game company Bethesda Softworks, the latest in a series of cyberattacks plaguing a broad range of online victims.

The group, which calls itself Lulz Security, posted what it called a “small, just-for-kicks release of some internal data” from Senate.gov on its website on Monday.

Likely referencing reports that the Pentagon is considering whether a cyberattack could be considered an act of war, the group also wrote “is this an act of war, gentlemen? Problem?”

A representative from the office of the Senate sergeant-at-arms did not immediately return a phone message for comment Monday afternoon.
File – In this May 15, 2011 file photo people wearing masks often used by a group that calls itself “Anonymous” take part in a rally in Madrid. Spanish police arrested three suspected computer hackers that allegedly belonged to a loose-knit international activist group that has attacked corporate and government websites around the world, authorities said Friday June 10, 2011. A National Police statement identified the three detainees as leaders of the Spanish section of a group that calls itself “Anonymous.” – AP

Bethesda acknowledged the intrusion in a blog post Monday, saying hackers may have gained access to users’ names, email addresses and passwords. The company said no credit card data or other financial information were compromised.

Josh Shaul, chief technology officer at database security software maker Application Security Inc., said the data Lulz posted is “verifiable proof” that it was able to gain access to and take control of the Senate’s website.

“It’s a very skilled group,” he said. “They claimed it was easy.”

Lulz Security has also recently claimed responsibility for breaking into the websites of PBS, Sony Pictures, Nintendo and others. Meanwhile, it’s unclear who was responsible for a recent cyberattack on the International Monetary Fund’s computer system or the one on Citibank that stole about 200,000 credit card account numbers, customer names and email addresses.

Shaul said the recent string of attacks take advantage of insecure systems. While companies are protecting the perimeter of their computer systems, once hackers get in, “everything is there to own,” he said. It’s the equivalent of a bank putting a guard at the door and leaving all the money in a pile instead of in safes and vaults, he added.

“We’ve created this situation where it’s so easy for a skilled attacker to break in and get data,” Shaul said. “They are doing it because they can.”

Bethesda declined to comment beyond its blog post and did not say how many users were affected.

In Twitter messages, Lulz (Internet-speak for laughs) said it has had information on more than 200,000 users “for weeks” and broke into Bethesda’s website more than two months ago. Bethesda, meanwhile, said that a hacker group “attempted an unlawful intrusion” over the weekend.

Lulz said on its website Monday it is not releasing information it has on the 200,000-plus users.

Bethesda, behind games such as “Brink” and “Fallout: New Vegas,” is a subsidiary of ZeniMax Media Inc., based in Washington, D.C.

PETALING JAYA: Anonymous, the hacker group that has threatened to attack the Malaysian Government portal, just announced its reasons.

According to its statement on the Pastebin website, the group is acting against what it claims are various acts of censorship by the Malaysian Government, and also because of the recent move to block filesharing sites, like the Pirate Bay, in Malaysia.

Anonymous also accused the Government of censoring movies and television shows, and for restricting the Internet, which it says is a basic human right.

“We fear that if you make further decisions to take away human freedom, we are obligated to act fast and have no mercy,” the group said in its statement on Tuesday.

The message was also uploaded on video-sharing site YouTube.

It featured a digitally-generated voice that read out the group’s message.

Anonymous will launch the attack at 7.30pm GMT on Wednesday (3.30am Thursday Malaysian time) and has named it “Operation Malaysia.” It posted the threat in a graphic on this website.

Mikko Hypponen, chief research officer at the F-Secure Corporation – a computer security software company based in Helsinki, Finland – tweeted about the threat at 4.42am Malaysian time Tuesday.

Meanwhile, online news site Epoch Times reported that Anonymous selects target countries based on input from users in those countries.

However, the report said, the hacker group has declined to say if there are any Anonymous members in Malaysia.

In the exclusive interview with Epoch Times, Anonymous said it expects the Malaysian Government to “not be happy” over the coming attack.

According to the report, Anonymous has reminded its members taking part in Operation Malaysia to use Virtual Private Networks to encrypt their network connections, and to transfer data from remote locations that cannot be accessed without authentication.

This would help protect the identities of the hackers and their locations.

The attack on the Malaysian Government portal would be in the wake of several earlier attacks by Anonymous on Turkish Government websites for alleged Internet censorship.

According to recent news reports, the Turkish Government has arrested 32 people, suspected to be members of Anonymous, after “Operation Turkey” disrupted a number of official websites in that country.