Digi will be the 2nd Telco to bring in Apple iPhone 3Gs, when will be Celcom turn? I have already leave my email address to Digi so that I will receive the 1st hand info when they have any updates on the iPhone 3Gs price or offer packages!

Leave your email now for the updates too or just visit saimatkong often then you will get the updates of the iPhone 3Gs deal! http://www.digi.com.my/iphone/. 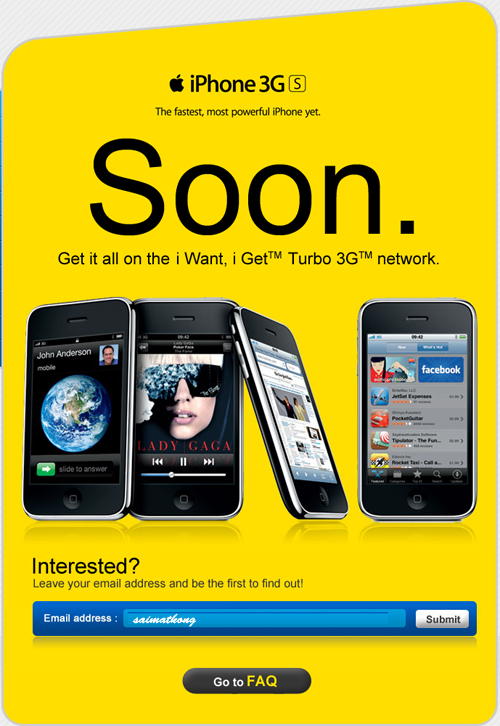 1. When will the iPhone be available?
The iPhone from DiGi will be launched within the first half of 2010.

2. What are the packages offered?
These will be revealed after the launch date has been announced.

3. Where will the launch date be announced?
It will be announced in selected major newspapers and broadcast media.

4. Who’s eligible to get the iPhone from DiGi?
Full details, including the packages and offers will be announced after the launch.

5. I am an existing DiGi customer, can I purchase an iPhone with my current rate plan?
We’ll let you know after the launch.

9. Can I pre-order the iPhone today?
Pre-orders / advanced booking will be announced soon. Please check www.digi.com.my/iphone for the latest announcements

Not sure whether Digi will bring in the latest iPhone 4G in June maybe? It’s a good competition with Maxis so we the consumers will be benefited from the better offers or services. No more exclusive to Maxis!

PETALING JAYA: The iPhone will be sold by DiGi.Com Bhd before mid-year and this could spark a price war on services and packages in the smartphone market.

The entry of DiGi in the iPhone space will also end Maxis Communications Bhd’s nearly one-year monopoly in the segment.

DiGi said yesterday it had reached an agreement with Apple Inc to distribute iPhone 3G and iPhone 3GS in Malaysia but the celco did not disclose when the packages for the iPhone will be launched.

DiGi said on its website that those already with an iPhone could switch to any of DiGi’s existing Postpaid/Prepaid rate plans.

That leaves Celcom Axiata Bhd, one of the three “big boys” in the local cellular industry, out of the iPhone race for now.

“We are open to the idea of selling iPhones,’’ Celcom Axiata chief executive officer Datuk Seri Shazalli Ramly said yesterday. He said talks with Apple first began two years ago and the talks were still under way.

He did not give any indication on which way the talks would go but did admit that it was “not easy to sell the iPhones as we need to get a support system in place before we can do that. That is why we chose to focus on selling the Blackberry.’’

DiGi is excited about the deal with Apple as it expects the “three-year agreement will help DiGi increase sales more than 5% this year, higher than the industry average,’’ its chief executive officer Johan Dennelind told Bloomberg TV yesterday.

“The iPhone is fashionable and trendy. There is a large enough market out there still looking for reasonably priced packages to buy the phone. The determining factor, however, would be pricing,’’ according to a market source.

Maybank Investment Bank senior analyst Khair Mirza reckons that pricing of the device is fixed by Apple but DiGi’s ability to tap into the market will depend a lot on its positioning, “hype” and data plans.

Analyst do not expect DiGi to see a huge impact on its bottomline in the near term.

As for Maxis, the entry of DiGi appears to be a dampener as they now have to compete with DiGi, but the impact on earnings will be small, according to analysts.

Maxis declined to comment on queries from StarBiz on its iPhone sales and DiGi’s entry.

But market research company IDC claims that the celco last year sold 91,000 units since the launch in March 2009 and the shipments included both the iPhone 3G and iPhone 3GS. The iPhone is sold in 85 countries and has about 25,000 applications that can be downloaded.