What do you think? Would you mind for a superb but not all real and solid for the Olympic Opening?

Unsung hero: Beijing first-grader was the voice but not the face of the Olympic opening song

One little girl had the looks. The other had the voice.

(AP Photo/ABC)
More PhotosSo in a last-minute move demanded by one of China’s highest officials, the two were put together for the Olympic opening ceremony, with one lip-synching “Ode to the Motherland” over the other’s singing.

So the pigtailed Lin Miaoke, a veteran of television ads, mouthed the words with a pixie smile for a stadium of 91,000 and a worldwide TV audience. “I felt so beautiful in my red dress,” the tiny 9-year-old told the China Daily newspaper.

Peiyi later told China Central Television that just having her voice used was an honor.

It was the latest example of the lengths the image-obsessed China is taking to create a perfect Summer Games.

In a brief phone interview with AP Television News on Tuesday night, the music director, Chen Qigang, said he spoke about the switch with Beijing Radio “to come out with the truth.”

“The little girl is a magnificent singer,” Chen said. “She doesn’t deserve to be hidden.” He said the ceremony’s director, film director Zhang Yimou, knew of the change. He declined to speak further about it.

China has been eager to present a flawless Olympics face to the world, shooing thousands of migrant workers from the city and shutting down any sign of protest.

The country’s quest for perfection apparently includes its children.

A member of China’s Politburo asked for the last-minute change during a live rehearsal shortly before the ceremony, Chen said in the Beijing Radio interview, posted online Sunday night. He didn’t name the official.

“We had to make that choice. It was fair both for Lin Miaoke and Yang Peiyi,” Chen told Beijing Radio. “We combined the perfect voice and the perfect performance.” 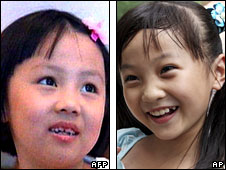 A pretty girl who won national fame after singing at the opening ceremony of the Olympic Games was only miming.

Wearing a red dress and pigtails, Lin Miaoke charmed a worldwide audience with a rendition of “Ode to the Motherland”.

But the singer was Yang Peiyi, who was not allowed to appear because she is not as “flawless” as nine-year-old Lin.

The show’s musical director said Lin was used because it was in the best interests of the country.

The revelation follows news that a fireworks display used during the opening ceremony was apparently faked.

Speaking on Beijing Radio station, musical director Chen Qigang said the organisers needed a girl with both a good image and a good voice. 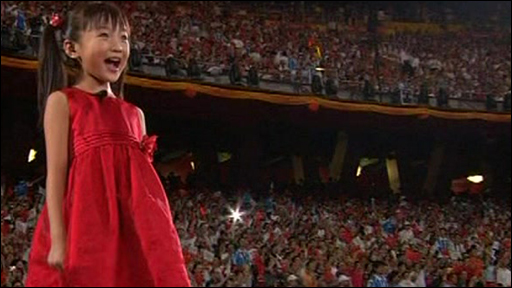 They faced a dilemma because although Lin was prettier, seven-year-old Yang had the better voice, Mr Chen said.

“After several tests, we decided to put Lin Miaoke on the live picture, while using Yang Peiyi’s voice,” he told the radio station.

“The reason for this is that we must put our country’s interest first,” he added.

“The girl appearing on the picture must be flawless in terms of her facial expression and the great feeling she can give to people.”

Singer Lin, who is being called the “smiling angel”, has already become a media celebrity because of her performance.

She told state-run China Daily that she felt “beautiful” in the red dress she wore during the performance.

Her dad told the newspaper that she already had fans all over the country.

According to Chinese news reports, Yang said she did not regret the decision, saying she was satisfied to have had her voice featured in the opening ceremony.

This is the second “fake” story about the opening ceremony

Viewers around the world saw a display in which 29 firework “footprints” travelled across Beijing from south to north.

But a senior official from the Beijing organising committee (Bocog) confirmed on Tuesday that footage of the display had been produced before the big night.

This was provided to broadcasters for “convenience and theatrical effects”, according to Wang Wei, Bocog’s executive vice-president.

“Because of poor visibility, some previously recorded footage may have been used,” he told a daily press conference.