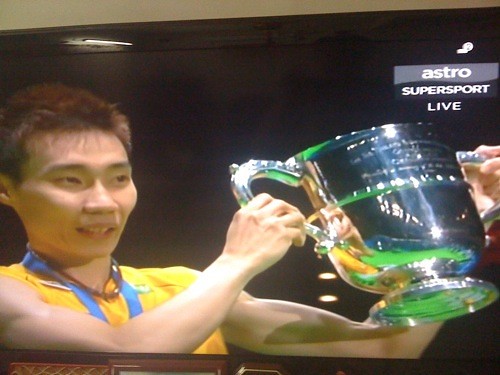 It’s really great and you could see that there’s tons of people mention about the great win in Twitter. You can check all the tweets that with the hashtag #LCW,#MalaysiaBoleh, #AllEngland

NajibRazak Mohd Najib Tun Razak
Sorry tmrw not a public holiday. We have to rejoice in Chong Wei’s victory n at the same time work hard so that we have more victories.

Check out the video footage on how Lee Chong Wei cleared the final shot to win the All England title against Lin Dan!

This time Lin Dan cannot take off his shirt and do naked hip-hop dance but it’s our Malaysia Hero Datuk Lee that dance with his jersey and kissing on Malaysia flag! I just love his attitude! Koo Kien Keat and Tan Boon Heong, please learn from your senior!

Yesterday, Chong Wei showed who was the real boss on the court when he defeated his nemesis, Lin Dan of China, 21-17, 21-17 in a highly-charged 52-minute final to retain the All-England title.

It was a priceless win and an ecstatic Chong Wei slumped to his knees in sheer delight before rising to the thunderous applause of the fans at the National Indoor Arena in Birmingham.

It was the first time that Chong Wei had beaten Lin Dan to win a major title and the record between the two archrivals now stands at 7-18.

With the win, too, Chong Wei reaffirmed his status as the world No. 1 and also hung on to the number one standing in the Super Series rankings.

And Chong Wei also became the first Malaysian to retain the All-England title since Eddy Choong pulled off the feat in 1956 and 1957.

But more importantly, the win yesterday showed that Chong Wei has the ability to come out of Lin Dan’s shadow and be a real challenger for the Olympic gold in London next year.

Lin Dan, gunning for a second consecutive Premier Super Series title after nailing the first in South Korea, got off to a smashing start but it was not too long before Chong Wei got into the groove.

Looking more confident and focused in his approach, Chong Wei piled up the pressure on the three-time world champion, often catching Lin Dan with his clever moves at the net and showing incredible defence to frustrate the Chinese.

They were tied at 8-8 and at one stage Lin Dan was affected by a bad line call and it allowed Chong Wei to pull away to 17-10.

Smashing finale: Malaysia’s Lee Chong Wei goes down on his knees to celebrate his victory over China’s Lin Dan at the National Indoor Arena in Birmingham yesterday. — AFP

But Lin Dan, who was ironically more interested in playing rallies than using his lethal attacking shots, fought back to 17-18. But that was as far as he went as Chong Wei snapped out of the spell to take the first game.

The second game was even tighter as both tried to outfox each other with their tight net shots and super fast counter attacks until they were tied at 17-17.

Instead of buckling under pressure like he used to before, a cool and composed Chong Wei romped home to take four points in a row to land himself a third title of the year after victories at the Super Series Masters Finals in Taiwan and Malaysia Open in January.

“He played a superb game and was able to overcome the psychological barrier against Lin Dan,” he said in a telephone interview.

“He not only handle the challenge from Lin Dan well but he also executed excellent counter attacks to pressure Lin Dan. That to me is a big improvement.

“Today, Lin Dan was making most of the mistakes and he was unable to kill some of Chong Wei’s shots. Chong Wei, on the other hand, maintained a consistent pace.

“Chong Wei has always been criticised for winning the small tournaments. But this time, he defeated Lin Dan for a big one.”