Malaysia Boleh! Datuk Lee Chong Wei Boleh! Lee Chong Wei played very well and this was the best game so far. Keep attacking and not giving opponent a chance to fight back against Chen Long.

He gained his entry to London Olympics 2012 Badminton Finals this coming Sunday at 8pm Malaysia time. 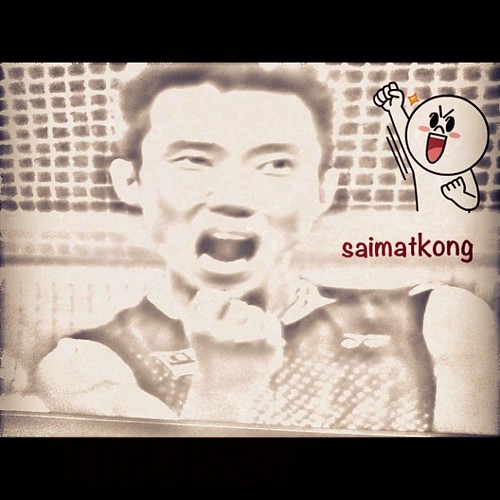 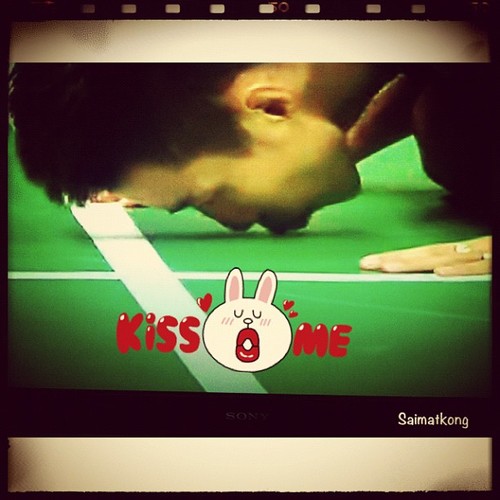 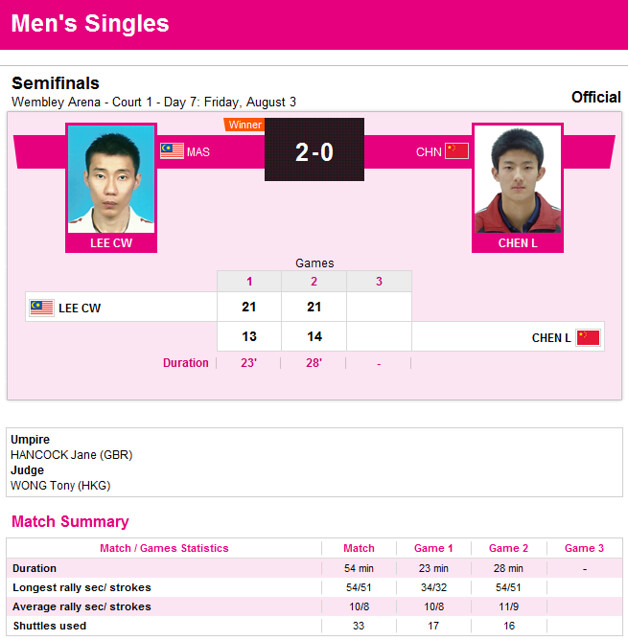 The rewards are already in place with a government guarantee of monetary prizes and the private sector offering a gold bar to the first badminton player to win a gold medal.

I believe this is also one of the motivation for Datuk Lee Chong Wei to push himself and put 100% effort in every games. Besides that, he’s getting married next year and this Olympics will be his last game before retiring.

Kuala Lumpur Rackets Club (KLRC) chief Datuk Seri Andrew Kam said he would be presenting a 12.5kg gold bar worth over RM2 million to gold medal winners, to be shared by shuttlers who won gold medals at the London Olympics.

LONDON: Datuk Lee Chong Wei has ensured that Malaysia returns home with a medal after he stormed into the final of the men’s badminton singles with a convincing 21-13, 21-14 win over China’s Chen Long at the Wembley Arena.

He will meet China’s Lin Dan on Sunday. The top Chinese shuttler easily beat South Korea’s Lee Hyun Il 21-12, 21-10 in the other semi-final.

Chong Wei won the silver medal at the Beijing Olympics in 2008 when he lost in the final to Lin Dan.

Then Chong Wei was the world number one while the Chinese at number two. This time the role is reversed with the Chinese having taken over as the number one in June.

His silver in Beijing was the only medal won by Malaysia in the 2008 Games.

With the silver medal in the bag, Chong Wei said that his aim is the gold.

“I treated tonight’s match as my last and went all out. I did not want to play for the bronze.

“My performance was a surprise to me too as I was able to stay in control and the match strategy worked well.

“I want to go for the gold medal. I have nothing to lose and I do not feel there is much pressure on me. I had promised to make the final and I have delivered.

“To the Malaysians I make this promise – I will do my very best to win that gold. Nothing else matters,” he said.

Chong Wei admitted that this was his best game in London and felt that all the hard work since coming back from an ankle injury was worth it.

“I always had the thought that my Olympic dream would be dashed at any time after the injury. But it is great to be back at my best. And even then I am only 50% of my old self.

“It does not matter who I play in the final. I want to win it. Chen Long was also under pressure to stop me and that is why his game suffered a little.

“But more importantly we knew what to do and I had worked it out with my coaches,” he said.

Chong Wei was in his element in the first set as he took control of the match from the first point. He stormed to a 6-0 lead before Chen Long took a point off him.

A leaping smash by Chong Wei gave him the set point. And another Chen Long blunder at the baseline gave the Malaysian first set at 21-13 in 23 minutes.

In the second set Chong Wei again started off leading and was 6-3 when the Chinese caught up with him.

Chong Wei then reeled off three points to keep his lead and soon moved to 10-7.

From then it was a game of chase as Chong Wei was forced to work hard to keep ahead of Chen Long.

Chong Wei extended his career wining record over Chen Long to 7-4 and then never looked back as he winning 28 eight minutes in 21-14.

THERE was more relief than jubilation on Lee Chong Wei’s features as he sealed a second successive final appearance in the Olympics with an emphatic 21-13, 21-14 win over China’s Chen Long at the Wembley Arena on Friday.

Cheng Long had been expected to give Chong Wei a massive test but the Malaysian, who is now one match away from becoming the first Malaysian to win Olympic gold, was just too determined for the China player.

Chong Wei and coaches Tey Seu Bock and Rashid Sidek got their tactics right and once Chong Wei took control, as had been the plan, there was to be no looking back.

“I can’t believe how well I played as I had come into the Olympics not as prepared as I would have wanted,” said Chong Wei after winning in 51minutes.

Victory was celebrated by first dropping to his knees, followed by pumped fists and then acknowledgement of the fans – the majority of who were behind Chong Wei.

“The pressure I was under was immense and I told myself that this was the final as I didn’t want to have to pysche myself up for the third-place playoff, which would have been very difficult.”

Seu Bock said Chong Wei had controlled the match exactly the way it had been planned.

“We wanted him to vary his game between fast and slow and that caught Chen Long off guard as he couldn’t cope with Chong Wei’s variations. The final is next (most probably against Lin Dan on Sunday) and Chong Wei will prepare as he did for this match, with focus and a sense of calm,” said Seu Bock.

Rashid was as vocal as Seu Bock on the sidelines and said the focus now is on getting Chong Wei to improve on his silver medal finish in Beijing 2008.

“He is a step away and we must work hard to ensure that he goes one better. I believe he can,” said Rashid, bronze medallist at the 1996 Atlanta Olympics.