Steve Jobs announced that the new iPad 2 will stay exactly the same price as the 1st generation iPad. If you are planning to grab yourself a cheap iPad, now is the time.

Right now you can grab up that base model 16GB WiFi only iPad for as low as RM1,199. It’s much more affordable now! Price reduction of RM350 and RM400 respectively from Wifi and Wifi + 3G model while stock last.

Get your iPad @ cheaper price at Apple Store now! 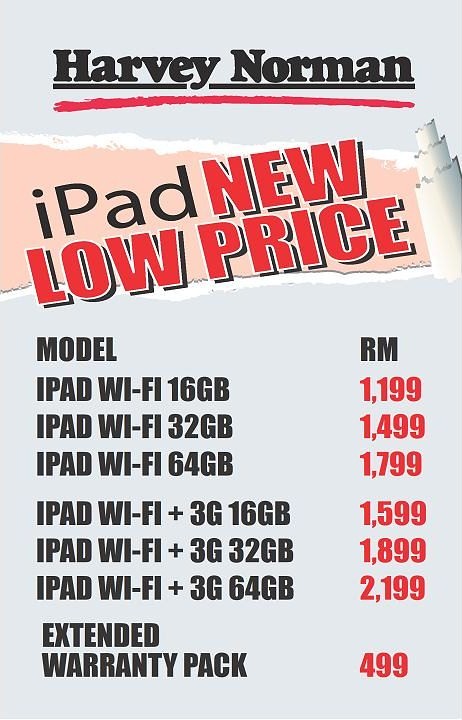 Or you could get your cheaper iPad @ Harvey Norman Store near you now too!

As you know, Apple has just made its second-generation iPad official! The new iPad 2 will be made available at March 11, that’s few days away from now! So if you are targeting for the new iPad 2 then stay tuned! Yes, you can even pre-order the all new iPad 2 in a thinner, lighter design, now! It’s 33 percent thinner and up to 15 percent lighter. I love the iPad 2 Smart Cover! Now iPad is even more amazing!

It features a 1GHz dual-core A5 chip and, finally, cameras, both on the front and rear. The new CPU is said to be up to twice as fast, with graphics performance up to nine times better than on the original iPad. Same battery life with Apple promising 10 hours. Apple’s also launching iOS 4.3 alongside the new iPad.

I will be getting one iPad 2 in my hand soon! Woots!