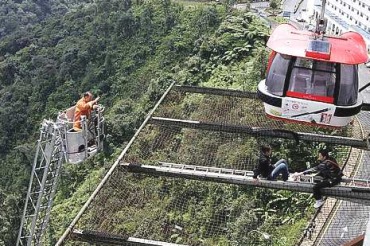 Failed attempt: Rescuers trying to persuade Lai to give up his suicide bid. Lai jumped out of a restaurant but landed on the Genting Skyway safety net. 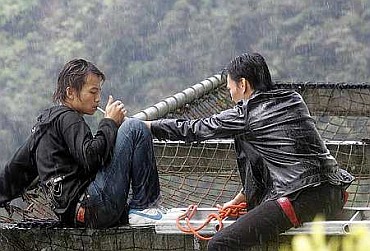 Rescue effort: A rescuer offering Lai a cigarette as he tries to talk him out of committing suicide. Lai finally relented at about 3pm.

I saw this news and I was thinking why ppl want to commit suicide? Commit suicide is a way of escape away from problem and it even create trouble to other ppl like your family. There’s nothing that cannot be solve and help is always out there.

If any problem or anything you can always talk to your family, friends etc and discuss the problem with them, I’m sure they will more than willingly to help. So do not commit suicide, it’s not wise to do that. I have seen some even commit suicide involving their children and wife / husband. This is socially wrong. Think for yourself and others.

PETALING JAYA: Deep in debt to loan sharks, a man jumped out of a Genting Highlands hotel restaurant window to his death. Well, not to his death. He crashed through the rooftop of the Genting Skyway station and landed on the safety net under the cable car system.

The man, identified as Lai, was seen kicking open the window of a restaurant at Highland Hotel before jumping out at 9am yesterday.

Stopped by the net, he sat on its edge for five hours, halting the cable car service and forcing all passengers to be transported to the lower station by bus and the Awana Skyway.

From 9.30am, firemen tried to coax him down and even offered him fried chicken, said a witness who declined to be identified.

“Later, he called his father and told him he was going to die today before switching off the phone,” the witness said.

About five hours later, firemen persuaded him to give up his death wish and police escorted him to the Kuala Kubu Baru Hospital at 3pm.