Thanks Nuffnang for the tickets and it was indeed a T. Music Festival!?! 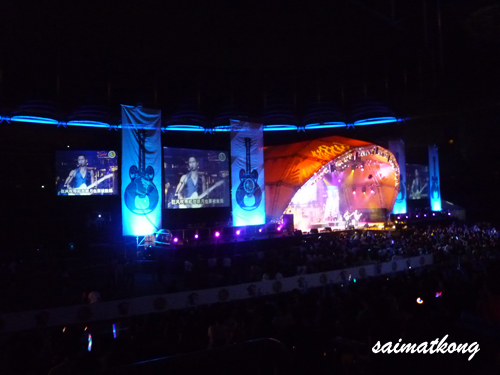 The concert started at 7pm but it was stated by all the local or not so famous artists and went smoothly until around 10.30pm, then suddenly one of the cable caught on fire and blackout. I was shouting “Foh Zok AHHhHh!!! Fai Di Hui Gao Foh!” (快d去救火啊!) to the Rela ppl standing at the stairs but he did not heard it and till mins later all the work crews and Rela members all rush to the scene. I saw some of the crew use water, apalah later sot circuit la, should use fire extinguisher mah. 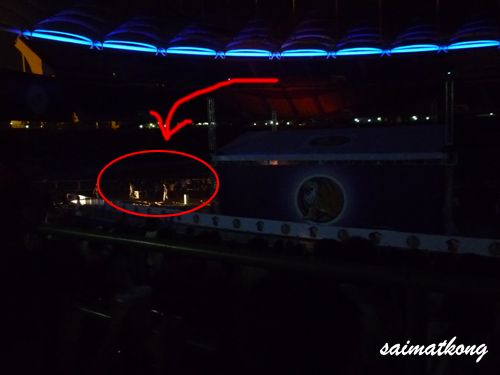 Is just like a scene in Final Destination 4 where the incident happened in the race track but this happened in stadium. We faster run to one side scare that it might explode or so. But luckily not!?! Some ppl even shouting for refund…

Finally they managed to out off the fire and try to change the cables and all. It took about 30mins+ to get the things done and leave all the crowds in darkness. Luckily the emcee of the night, MyFM DJ Nicholas and Mei Yan and another HK emcee use hailer to control the crowd and asked the artist to sing use the hailer and the audiences follow to sing along. It’s an experience that you properly will not get to experience in your life time. It’s really nice feeling.

Maybe the fire is just like candle for them to blow for Galaxy 15th birthday!

Video Captured by joshuaongys, I was too scare and run one side d, ahah he still can shooting over there. So how can organisers denied this and said the power failure was caused by a fuse problem? Weird thing is that Chinese Daily did mention that it’s small fire “小火災”?

KUALA LUMPUR: A power failure at the five-hour music marathon concert T Music Festival saw some of the performers coming up with impromptu ways to calm the audience down.

During the half-hour blackout on Saturday night, singers such as Z-Chen, Khalil Fong, Kay Tse and David Tao came onstage to interact with the audience.

Besides that, some singers even sang a cappella-style, much to the delight of the audience at the Bukit Jalil National Stadium.

Crowd pleaser: Hong Kong singer Justin Lo being flanked by dancers as he performed at the T Music Festival at Bukit Jalil on Saturday night.

The massive crowd continued to enjoy performances when power was finally restored.

There were about 20 singers from Asian countries such as Taiwan, China, Thailand, Singapore , Malaysia and Hong Kong.

Local singer Andrew Tan kicked-started the marathon-style show but it was Macau duo Soler that got the crowd rocking.

In all, more than 73 songs were performed.

The show ended with a performance from Hong Kong popular songstress Joey Yung.