PSY oppa gangnam style! OoooOooOOoooh yeah? PSY in the house? Hmm should we spend such a big amount just to invite PSY to perform and celebrate during the BN’s CNY Open House? RM2 million to get Oppa song live in Penang, Malaysia… Serious?

Penang BN Youth chief Oh Tong Keong said Psy’s appearance was sponsored by a private company in Kuala Lumpur , refuting claims that the ruling federal coalition had splurged on public funds to bring in the celebrated singer of global hit song “Oppa Gangnam Style” in a bid to draw support from young voters in Election 2013.

“Even the preparations and food for the celebration are sponsored by several local companies,” Oh told The Malaysian Insider.

“We have prepared food for 50,000 people but we expect more will turn up to watch Psy’s performance,” he said.

The K-pop star whose real name is Park Jae-Sang, is set to perform on February 11 at the Han Chiang school grounds, significant for being the grounds that launched the DAP to overwhelming victory in Election 2008.

Psy was reported by local entertainment news portal Redcarpet to have asked a Malaysian concert promoter for US$750,000 (RM2.3 million) for a possible appearance in Kuala Lumpur last year.

“DAP and Pakatan Rakyat want to say and spin that BN spent government’s money worth RM2.3 million to RM3 million on Psy,” a Penang BN official told The Malaysian Insider.

“This is factually incorrect as Psy’s visit as a guest of the Penang CNY Open House event was arranged and sponsored by Mega Ultimate, an event organizing firm. No government or taxpayers funds are involved.”

The official, speaking on condition of anonymity, said Psy’s presence could only raise the profile of Penang and Malaysia, which would help boost tourism.

Oh admitted Psy would be the main draw at the BN’s Chinese New Year celebration, which would Prime Minister Datuk Seri Najib Razak would also attend, but said it was not specifically aimed at getting the Penang youth vote.

“This is the first time Psy is performing in Malaysia so I am sure not only Penangites will be attending the event but it will also attract those from Kuala Lumpur, Kedah and Perak,” Oh said.

He said the mindset of the youth was different now and doubted they would be easily swayed just by Psy’s appearance at the BN party to vote for the coalition, which is now in the opposition in the state now under Pakatan Rakyat (PR) government.

“We use other more practical programmes such as job fairs to draw in the youth,” Oh said.

DAP secretary-general Lim Guan Eng was reported by Chinese vernacular paper Nanyang Siang Pau to have encouraged Penangites to join in the state BN celebrations and enjoy themselves.

Lim, who is Chief Minister of Penang, asked revelers to dress in red, yellow and green, to show their political support for causes that his DAP party, as a partner in the PR federal opposition bloc, was backing.

Psy dances on the red carpet upon arrival at the Palais des Festivals during the 14th Annual NRJ Music Awards on Jan 26, 2013 in Cannes.

The artiste is expected to perform his viral hit Gangnam Style in front of some 60,000 guests, including Prime Minister Datuk Seri Najib Tun Razak.

The open house is held at Han Chiang High School from 10am to 1pm.

Psy a ‘gift’ from BN to the rakyat 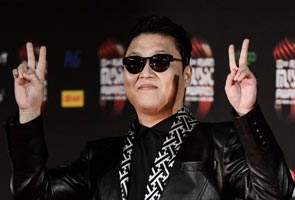 KUALA LUMPUR: The scheduled performance by South Korean sensation Psy in Penang for state level Chinese New Year celebrations on Feb 11 is a “gift” from Barisan Nasional to the rakyat.

Penang Gerakan vice-chairman Wong Mun Hoe said bringing Psy to Penang was not politically motivated and is purely for entertainment.

“The reason we invited him to Malaysia is because he is an international superstar. This is also a gift to Penangites who do not always get to meet an entertainer of such stature,” said Wong.

“I feel the rakyat can relate to him. We wanted an event of international standard and we felt that it was appropriate to have Psy as a guest with our Prime Minister present.”

Asked who will be forking out the cost of bringing Psy to Malaysia, Wong said he was “uncertain”.

“There will also be other entertainers including Sheila Amzah and also lion dances and Chingay performances during the event,” Wong added.

Wong, who is also BN coordinator for Pantai Jerejak, criticised DAP for only managing to come up with a parody of Psy’s hit ‘Gangnam Style’ with their ‘Ubah Roket Style’.

“If we want Gangnam Style, we bring the original, unlike some who only copy.”

However, he added that everyone, including Opposition leaders, are invited to the open-house event which is scheduled to be held at the Han Chiang High School in George Town.