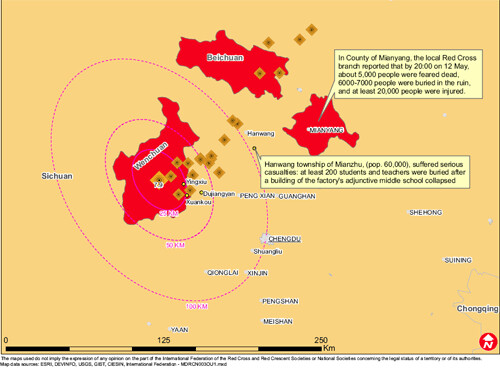 On Monday, May 12, at 2.28 p.m. Beijing time (6:28 GMT), a major earthquake, measuring 7.9 on the Richter scale, jolted southwestern China’s Sichuan Province. Several lower-scale earthquakes and aftershocks followed in the same area. The quake destroyed many buildings in the area, as well as infrastructure like communication towers.

According to the latest reports, more than 12,000 people have died and many more have been injured or are missing. Many schools were destroyed, including one that had at least 900 students in it. As authorities reach more remote areas, these numbers are expected to rise.

Chinese state media say more than 50,000 people have died in the earthquake that devastated parts of China on Monday. The warning comes after the government confirmed that the death toll had risen to 19,500 Rescue efforts continue to search for thousands still trapped. About 10m people across the Sichuan province have been directly affected by the 7.9 quake.

Chinese authorities say 60,000 quake victims have been rescued and that all affected areas have now been reached. The country is sending 30,000 extra troops to Sichuan to help the 50,000 already involved in rescue efforts. Some soldiers parachuted into the remotest areas, and dropped essential supplies from aircraft. Beijing says it will accept foreign aid and has agreed to help from rescue teams from Japan and Taiwan.

The 2008 Sichuan earthquake shook Wenchuan County, Sichuan province of the People’s Republic of China at 14:28:04 local time (06:28:04 GMT). It had a magnitude of 7.8 Mw according to the State Seismological Bureau of China and United States Geological Survey. The earthquake was felt as far away as Beijing and Shanghai, where office buildings swayed with the impact and Vietnam capital Hanoi.The closest major city from the earthquake’s epicenter is Chengdu.

Office workers in Chengdu reported a “continuous shaking for about two or three minutes”, with many people rushing outside.

I can feel the pain and after watching all the images and pictures and videos of the Shichuan, Cheng

What you can do to help them? If you have money then you can donate and if not you may want to help up by referring to these two site.
American Red Cross
International Federal of Red Cross and Red Crescent Societies (IFRC)

How to Support the Relief Efforts

1) Donate to the International Response Fund

You can help those affected by countless crises around the world each year by making a financial gift to the American Red Cross International Response Fund, which will provide immediate relief and long-term support through supplies, technical assistance and other support to help those in need.

The American Red Cross honors donor intent. If you wish to designate a donation for a specific disaster, please do so at the time of donation.

NOTE: The Red Cross has a four-star rating from Charity Navigator for its effective use of donations.

The American Red Cross does not have plans to deploy personnel to the disaster site at this time. Well-meaning individuals are urged not to report directly to the affected areas.

We do, however, have opportunities for volunteers and employees to respond to domestic disasters, such as the recent tornadoes and daily house fires. Some chapters are also recruiting for local volunteers to help them deliver services to the international communities within the United States.