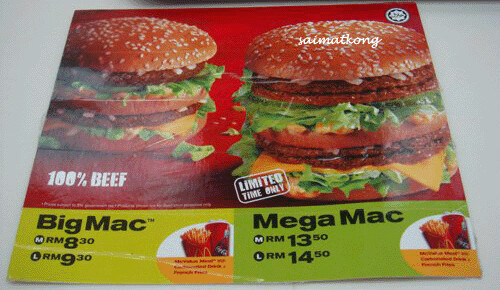 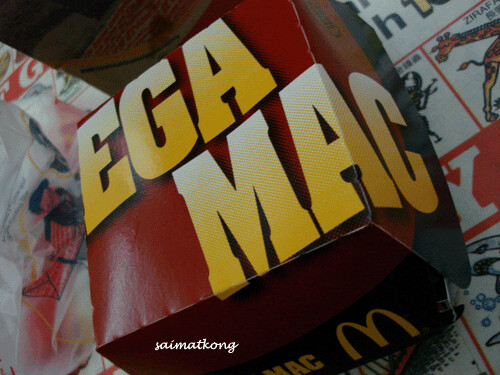 See how huge it is… McD Mega Mac

The Mega Mac – four 1.6 oz (45.4 g) beef patties and an extra slice of cheese. Available in Ireland, Japan and Malaysia. Discontinued in Australia, New Zealand and the United Kingdom, limited availability in the United States and Canada (where it is commonly marketed under the name Double Big Mac).

The Big Mac was created by Jim Delligatti, one of Ray Kroc’s earliest franchisees, who was operating several restaurants in the Pittsburgh, Pennsylvania area. [10] Customer response to the Big Mac was so good that it rolled-out nationally in 1968. According to its advertising jingle, it consists of “two all-beef patties, special sauce, lettuce, cheese, pickles, onions on a sesame seed bun“, though the most distinctive feature is a middle layer of bread (“club”) used to stabilize contents and prevent spillage.

The Big Mac is known worldwide and is often used as a symbol of American capitalism. The Economist has used it as a reference point to determine the cost of living in different countries — the Big Mac Index — since it is so widely available and is comparable across markets. This index is sometimes referred to as Burgernomics [11]

The Two all beef patties, special sauce, lettuce, cheese, pickles, onions on a sesame seed bun. concept for the jingle was created by Charles Rosenberg, Creative Supervisor of the Dan Nichols team at Needham, Harper and Steers, Chicago. Originally, the ingredients appeared as a one-wo

rd heading for a McDonald’s ad developed for college newspapers. The words were then set to music created by Mark Vieha, who performed the original jingle. Charlie’s advertising concept was to purposely turn the ingredients into a tongue twister. The jingle first appeared in a TV commercial titled “In a Word” developed by Dan and the advertising agency team. The first run of commercials ran only a year and a half, going off the air in 1976, but its popularity remained beyond its TV life.

Many franchisees in the United States ran promotions during the original campaign that awarded a free burger to customers who could recite the slogan within a specified time (usually two or three seconds). One example of its success, was that the McDonald’s operators in New York City actually ran out of Big Mac buns. McDonald’s Australia emulated this promotion in the mid-1980s, and some Brazilian McDonald’s around the same time (only offering a free glass of Coca-Cola instead), in the Portuguese version, which goes as “Dois hamburgueres, alface, queijo, molho especial, cebola e pickles num pão com gergelim”.

In 2003, McDonald’s revived the phrase. In an English-language ad from McDonald’s international “i’m lovin’ it” campaign, a rapper rapidly spouts off the trademark in the background music. Also in 2003, American Greetings and Carlton Cards released a Christmas ornament of a Big Mac, on which the slogan was both printed and played aloud by pulling on a string. Roy Bergold, National Advertising Manager at McDonald’s, has a big hand in championing the original campaign and helping to bring it back.

In 2008, once again, the phrase was revived by McDonald’s Malaysia. The revival includes the original prize of a free Big Mac if the customer is able to recite the phrase in under four seconds. This was released in May, along with the promotional Mega Mac, which has four beef patties rather than the original two.[12]

It was so long time ago and now only it reach Malaysia, Boleh Land. =)

So I went to try it out despite of the price which cost me RM13.50 for a medium set. 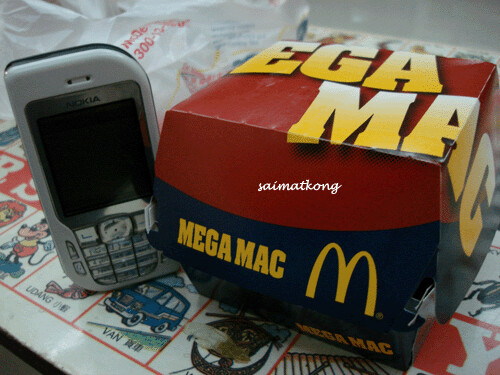 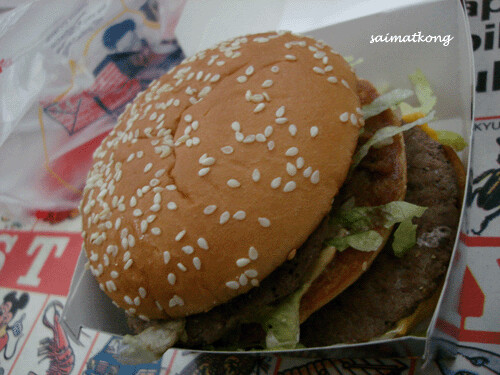 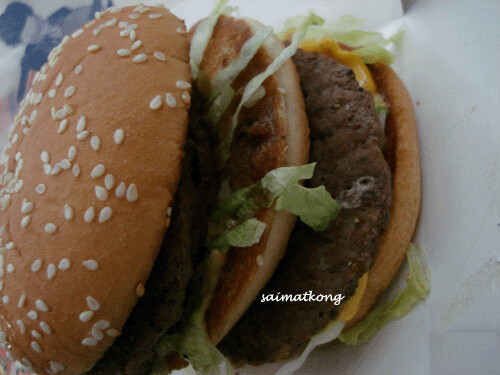 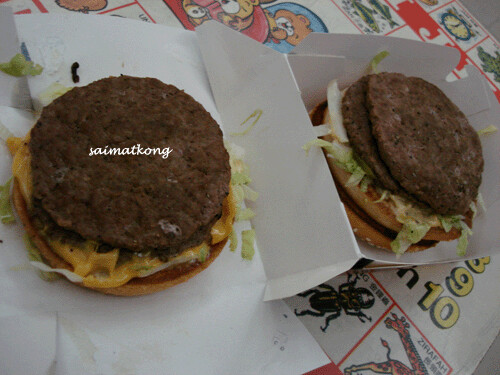 You can actually order one Mega Mac and split it into two and share. Save money =) 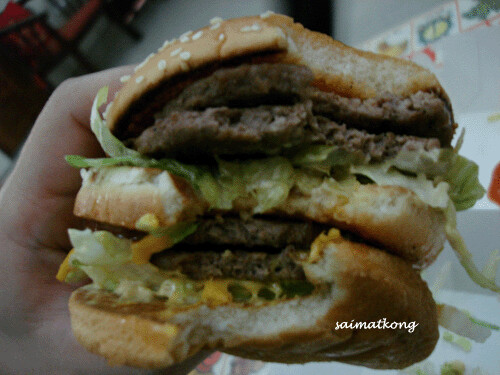 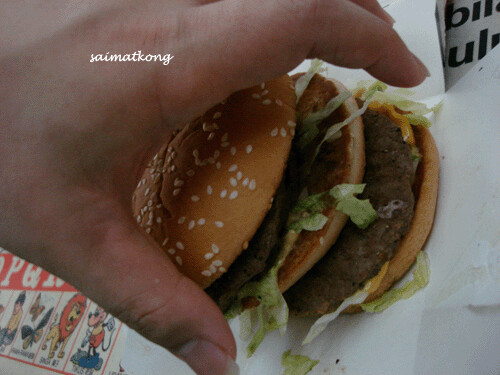 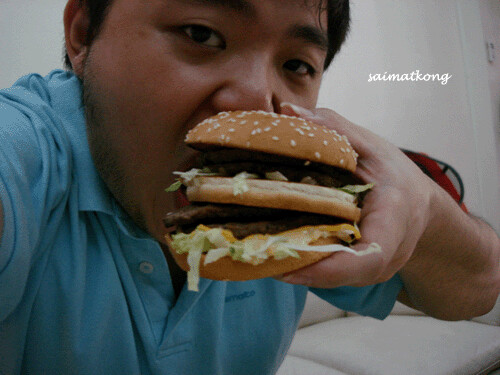 Look, I can handle it. Haha… 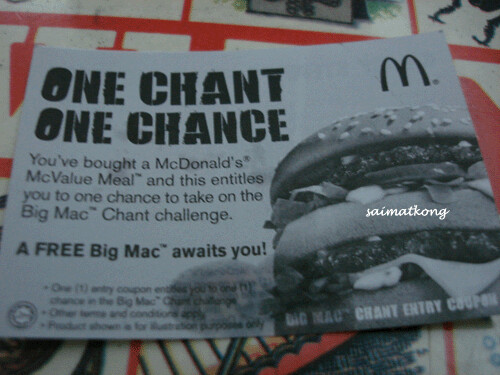 watch how kennysia got his Mega Mac for free!

I wanted to go and do the big mac chant and claim my free Mega Mac but then too bad, I was busy and the last day was 28 May… wasted one Mega Mac =(

ahah Mega Mac vs Carl’s Jr. Actually Carl’s Jr burger is much bigger and huge than Mega Mac… but why Mega Mac? Coz I’m lovin’ it =) and of coz the price is much more cheaper too =p 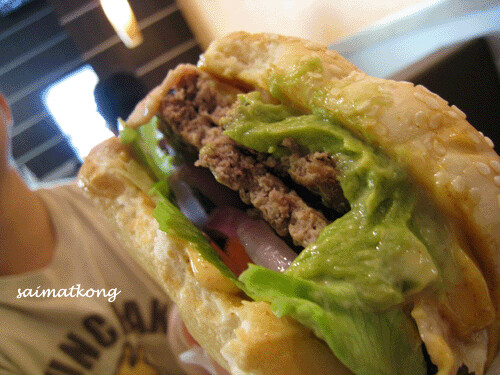 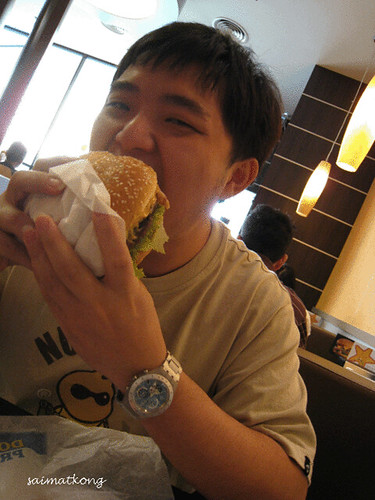 eventhought it’s huge, but I can handle it too. =p 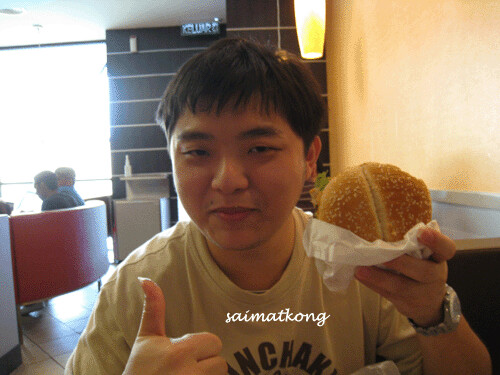 All in all, I love burger =p
be it Mega Mac, Carl’s JR, or even the Ramli and Otai Burger (Chicken or Daging Sepcial) by the road side.