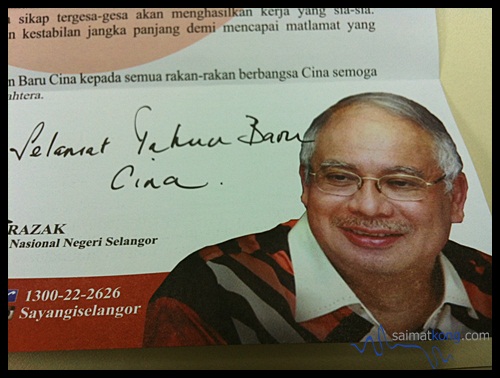 Play and listen to the wishing by Najib and his son, Nor Ashman.

Najib and his 22-year-old son were featured in a 40-second Chinese New Year radio advertisement that went on air yesterday.

The advertisement started with a female narrator saying: “Hey, someone is learning to speak Mandarin”.

“Na Ji. Wo shi Na Ji (I am Najib),” said Najib as his son, who has previously studied Mandarin at the Beijing Foreign Studies University, corrected his pronunciation.

The narrator then went on to say: “What a surprise it is, our Prime Minister. And who is teaching him to speak Mandarin?”

Nor Ashman then asked his father if he knew the meaning of his name in Chinese, to which the Prime Minister replied: “Yes, I was told that it means to embrace luck and all positive things in life.

Najib then asked his son the meaning of his Chinese name, to which Nor Ashman responded: “Si ji ping an (Peace for all seasons)”.

Both the father and son combined their names to extend a festive greeting to listeners: “Chinese New Year is around the corner. Let us extend our greetings to all.”

Najib’s political secretary Wong Nai Chee said it had been a tradition for the Prime Minister to send out greeting cards every Chinese New Year.

“But in addition to sending cards, we thought of doing something different this year,” he said, adding that the banter between Najib and Nor Ashman also reminded the public that the Prime Minister was also a father.

The advertisement, said Wong, was aired at 11 radio channels, including Red FM and 988 FM.

“Apart from the usual Putrajaya Chinese New Year card, a personal card will be given randomly to those born in the Year of the Snake.

“The card will feature both Roman and Lunar calendars on its back,” he said.

Popular blogger Jason Goh lauded the Prime Minister for going out of his way in delivering his Chinese New Year wishes.

“I liked it because it feels like the Prime Minister is learning Chinese just to wish everyone. The intonation sounded so good. It was as though a Chinese (person) was speaking,” said the 29-year-old from Kuala Lumpur .

As a member of the Chinese community, Goh said he was proud of Najib, wondering “if he’ll learn too speak Tamil when Deepavali comes?”

Joe Maxwell, 31, from Kuala Lumpur described the advertisement as creative, adding that one “could tell he (Najib) had put a lot of effort in making the greeting unique, and it came off as hip and youthful to the listeners.”

A strange incident on a highway in Germany. CCTV Footage shows a cargo truck being lifted off the highway by a strange light.

It seems that whatever was pursuing the truck was after the cargo which went missing immediately after. Is everyone just overreacting or could this really be something extraterrestrial? Curious to see just what was inside the truck and to know what the mysterious light caught on camera was?