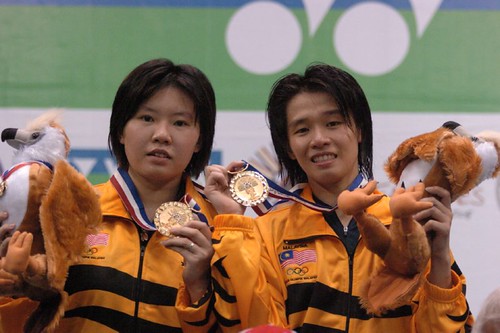 Malaysia’s top women doubles shuttlers Wong Pei Tty-Chin Eei Hui received a timely boost ahead of the Beijing Olympic Games when they powered into the final of the Thailand Open in Bangkok today but their experience and teamwork is still not the best to beat China’s Yang Wei-Zhang Jiewen, whom they have never beaten in nine meetings.

Although in the opening game, Wong Pei Tty / Chin Eei Hui performed very well and beat Yang Wei-Zhang Jiewen 15-21, but it was not their luck to win the 2nd and rubber set in this SCG Thailand Badminton Grand Prix Gold 2008. They lost their confidence and did not perform very well, everyone expect to see a big win by the underdog but they did not make it in the second and rubber game. They lost 21-13 in second game and 21-13 in the rubber game.

Hope they will gain enough experience and knowledge and partnership for their coming game and Olympic which is just 40days away.

In the men’s double and men’s single Malaysia did not qualified for final as we did not send our top players to compete in this Thailand Open.

What I can say is All the title was sapu by China as most of the matches is China vs China. If Malaysia were to sent out all the top players like Lee Chong Wei, Wong Mew Choo, Khoo Kien Kiat / Tan Boon Heong, we should be in final and maybe getting the cup? Malaysia Boleh!

KUALA LUMPUR: Malaysia’s Chin Eei Hui-Wong Pei Tty did not win at the Thailand Open yesterday but as far as coach Pang Cheh Chang is concerned, the duo succeeded in their task to forge a better understanding ahead of the Beijing Olympics in August.

A first Open title continued to elude the top Malaysian women’s pair, going down 21-15, 13-21, 13-21 to Zhang Jiewen-Yang Wei of China in a 49-minute final. But they did a creditable job to take the first game off the top seeds.

Despite the defeat, Cheh Chang said that Eei Hui-Pei Tty certainly lifted their spirits ahead of the Beijing Games with their performance in the Thailand Open.

“This was their third back-to-back tournament. They competed but struggled in Singapore and Indonesia,” he said in a telephone interview from Bangkok yesterday.

“The reason we listed them for the Thailand Open was for them to find the missing link in their partnership. They found their rhythm here. Taking one game off the world number one today will give them the confidence to take on the world’s best.”

Eei Hui-Pei Tty will resume work to prepare for the Olympics after a three-day break. Eei Hui will be undergoing treatment for knee pains, which hampered her performance yesterday.