Apple iPad 2 is available in Malaysia this Friday! 29th April

Yup, finally iPad 2 here! Wanted to get an iPad but waited for iPad 2 since then. Should I get it? 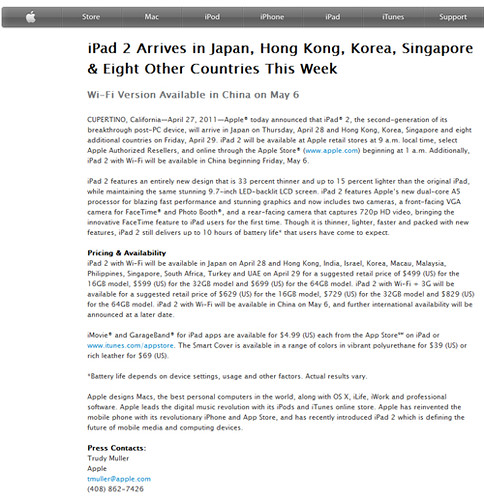 iPad 2 will be available for sale on 29th April 2011, Friday and expected to start at 9am while the Apple online store starts earlier at 1am.

Where To Buy Apple iPad 2?

Will you be one of them who queuing up for the new iPad 2 this coming Friday? My advise is NO! Don’t waste your time queuing up. Why?
1) If you are working, you need to apply for leave.
2) Need to start queuing very early maybe 6am? Or maybe some even over night or camp there?
3) There’s no discount of special offer stated till now for the early bird buyer.
4) You may end up empty handed without the iPad 2 as there will be a quota set for daily iPad 2 sales.
5) They might be some iPad 2 already reserved for the pre-order ppl and there will be less unit available?
6) Ended up just waste your leave, waste your time, waste your energy?
7) It will be the same if you get it after the launching period and not fighting with others?
8) You can just order from Apple Store with free shipping and engraving too!

If you think all the above is nothing to you then by all means go ahead and queue and grab your iPad 2 and be a happy Apple customer! =)