I want my iPhone 3G! Fast fast come to Malaysia. If not I will fly to Hong Kong or Singapore to steal it. Haha =p 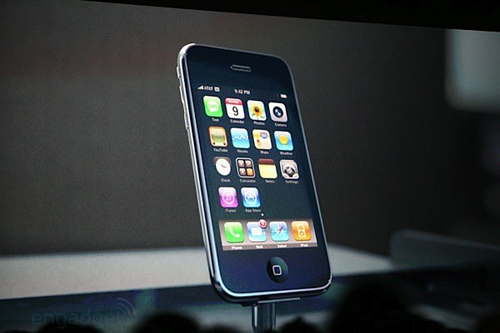 Sorry, we don’t have pictures but Apple took us into a dramatically lit back-room to check out the new iPhone 3G. Here’s what you need to know:

* The enable/disable 3G setting is real, and buried a few menus deep. There is no automatic switching, Apple just assumes you’ll leave 3G on, and that the iPhone has the juice to support that usage.

* It’s tri-band 3G, as we reported the other day. This same phone will ship worldwide.

* Yes, that GPS is A-GPS, just as we mentioned.

* Geotagging photos is a thumbs-up. We were deep indoors though, so native GPS wasn’t working and we couldn’t get a clear idea of satellite acquisition time.

* The screen looks exactly the same — maybe a tiny bit brighter, but the unit was new, so it’d be negligible.

* The camera is identical to the first — 2 megapixels. No front-facing camera (of course).

* It’s certainly thicker feeling, but they rocked it Treo-style and really tapered those edges, so it just doesn’t feel that different. But because of that curved back, it’ll dance around on your table a little more than your completely-flat original iPhone.

* The plastic back didn’t feel too cheap. In fact, it felt pretty solid. It’s very glossy, so it’ll pick up fingerprints just as well as the glass up front (yay).

* It comes with a ridiculously, absurdly small power adapter. It basically looks like a tiny square with a USB port on one side, and power prongs on the other. It will power any other iDevice (iPod touch, 1st gen iPhone, etc.), and sell separately for those that want a smaller adapter.

* The dock (now sold separately) and adapter (if you want an extra) will both go for something like $29, although that price is not yet confirmed.

* No mention was made of copy/paste, MMS, etc.

* It doesn’t look like this thing is going to fit in your old dock. The new dock does look smaller and more sculpted to the new iPhone’s curves.

* The headphone jack is flush, as mentioned. It’s still 3.5mm, so if you don’t like the out of box phones (which won’t stay in our ears), bring your own, no problem — and no adapter needed!

* Yes, original iPhones are totally gone, you won’t be seeing those made anymore. Long live the aluminum back!

It looks like they took an amazing device and made it significantly better. If the battery life is as good as they claim, we think this will steamroll the competition in the enterprise space. And even if it doesn’t, at $199 it’s going to be extremely hard for people to resist.