Just back from the Thomas Cup match between Malaysia vs Japan and Malaysia did badly from second single on wards. Scored with 1st Single : Lee Chong Wei and 1st Double : Koo Kien Keat / Tan Boon Heong. 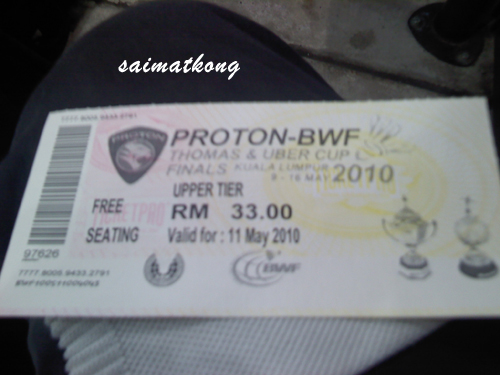 I got myself RM33 Thomas Cup ticket, wanted to get the silver which is RM63 but the nice seat sold out so have to get the higher teir which is actually good too. 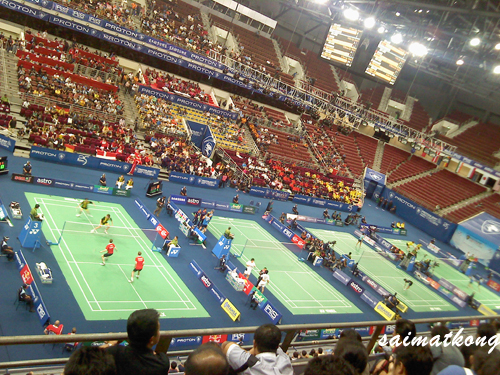 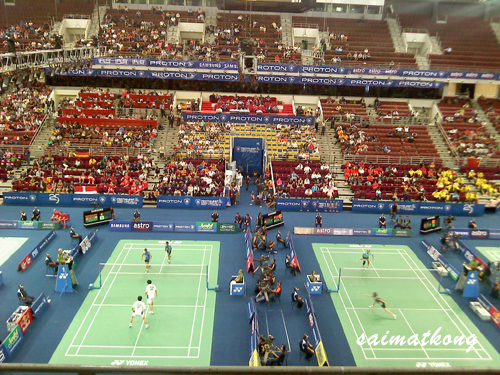 A lot of audience were too disappointed… The whole stadium just boo the double coz the bad result n shouted balik kampung! Aiyoyo… Some even shouted Hafiz = Habis?? We will still support all our players! Please score well in the next match!

Hmm a bit down coz never get to see Lee Chong Wei match yesterday coz I was late and Wong Mew Choo did not play yesterday also a bit let down. On the other hand our young Uber cup player Sonia Cheah was the only hightlight yesterday! Keep up the good work and you may be the next Wong Mew Choo, just make sure you get the experience.

In the quarter-finals (Today), Malaysia will take on Denmark while China will meet Korea again for a place in the semifinal. Could we make it to Semi Final? Could our player take it seriously and play it with all their strength? Please don’t disappoint us again!

When a player did badly it will surely get boo but Mohd Fairuzizuan Mohd Tazari lost his cool and retaliating to the foul language and a vulgar sign shown by a fan. Please behave and do your best in all the up coming games before Rexy decided to change players!

On the other hand, there’s few counter selling sports equipment like racquet, shoe, jersey, pants etc. There’s a booth by Li Ning too. I saw a racquet which cost RM1k + wow! If you want to get something when you are there, remember to bring enough cash. You could do the Country printing on your shirt too for RM8 if I’m not mistaken. I have few shirt printed “MALAYSIA” =p

If you are going to watch Thomas Cup match make sure be there early to get good seating (there will be ppl selling illegal tickets “wong ngau fei” 王牛票 at lower price outside the counter too but make sure not to be cheated) and good parking too! The food and drinks are at higher cost too! I heard some uncle and aunty said watch at home better, watch her got no reply and don’t know which player are playing… lol 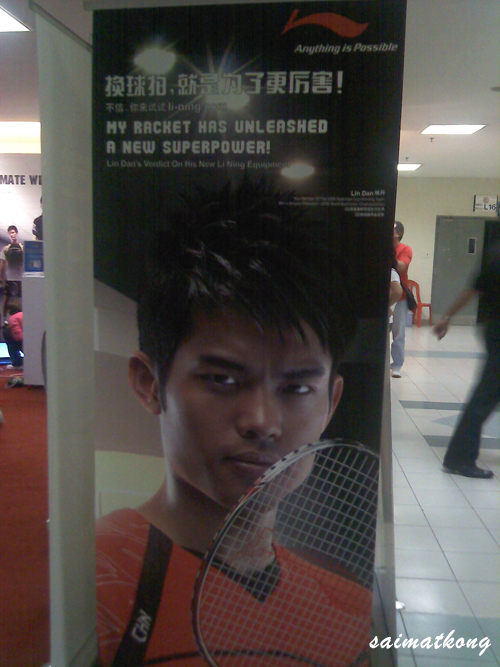 THOMAS CUP: MALAYSIA GIVE UP LEAD TO LOSE 3-2 TO JAPAN

KUALA LUMPUR (11 MAY 2010) – Malaysia Muhd Hafiz Hashim just could not lift his game in the vital point as Japan came from 2-0 down to beat Malaysia 3-2 in their Group B Thomas Cup match.

Following the win tonight, Japan were seeded for the quarter-final draw as group champions while Malaysia were unseeded as the group runners-up.

In the quarter-finals, Malaysia will take on Denmark while China will meet Korea again for a place in the semifinal.

The other quarter-final matches will see Japan taking on Germany while India will meet Indonesia.

“We will be better prepared to face Denmark in the quarter-final. Any team in the quarter-finals are tough opponents. It won’t be easy but we will take heart from the defeat to Japan and go all out to get into the semi-finals. The tournament is into its third day but we were playing only our first match,” said chief coach Rashid Sidek.

“This, to a certain extent did affect our overall performamce although we led 2-0 after the first two matches through Lee Chong Wei in the first singles and the first doubles through Koo Kien Keat-Tan Boon Heong.”

However, Malaysia failed to ride on their 2-0 lead after Koo Kien Keat-Tan Boon Heong won the first doubles with a 21-13, 21-17 win over Noriyasu Hirata-Hirokatsu Hashimoto.

Msuda, a former doubles player who last played in the Beijing Olympics in 2008 with Ohtsuka Tadashi where they reached the quarter-finals of the men’s doubles, believes Chong Wei was also better prepared to face Tago in the Thomas Cup.

“It was a close battle in the All England final. But today Chong Wei was simply in his class and the vociferous home crowd also gave him the edge,” added Masuda.

Later, Chong Wei told a press conference that he was indeed ‘well and better prepared’ for this match after studying a video recording of the Japanese’s game which he discussed with coach Datuk Misbun Sidek.

“In the All England final, I was unprepared for Tago. He was a surprise finalist and I did not know his game well. But today, I was well prepared and knew what to do. The big crowd support also drove me on,” said Chong Wei.

Koo Kean Kiet-Tan Boon Heong made it 2-0 for Malaysia when they beat Noriyasu Hirata-Hirokatsu Hashimoto 21-13, 21-17 in 27 minutes.

“I am very satisfied. We were well prepared not only for this match but also for this tournament. First set we played simple but in the second set we played more aggressive and tried some more daring shots,” said Kien Keat.

Boon Heong, however, said it would have been better if the Malaysians had played Nigeria in the first match on Sunday to ‘get the feel of the tournament and the environment inside the stadium.’

Veteran Wong Choong Hann failed to deliver the third and winning point for Malaysia when he fell 17-21, 18-21 to Sho Sasaki in the second singles.

“I blame myself for the defeat. This is the first time I played Sasaki. But it has not affected my confidence although I am well aware that my opponents in the coming matches will be much more tougher,” said Choong Hann

As for Hafiz, he said: “I made unforced errors to hand the Japanese the win. The pressure was on me to deliver with the score tied at 2-2. But I promise to redeem myself in the next match.

“There is still another chance for us to prove our worth and stay in contention.”

MALAYSIA went down to Japan for the first time in the history of the Thomas Cup Finals on a night when emotions ran high at the Putra Stadium in Bukit Jalil. They were beaten 2-3 in a tie to decide the Group B winners.

And doubles shuttler Mohd Fairuzizuan Mohd Tazari is staring at disciplinary action for losing his cool and retaliating to the foul language and a vulgar sign shown by a fan.

The ugly incident took place after Fairuzizuan-Mohd Zakry Abdul Latif had lost 15-21, 12-21 to Kenichi Hayakawa-Kenta Kazuno in the second doubles match to allow Japan to draw level at 2-2.

With the defeat, Malaysia lost the third seeding in the draw for the knockout stage and they will play against Denmark in the quarter-finals today.

National doubles chief coach Rexy Mainaky apologised for Fairuzizuan’s bad behaviour and felt that his charge should have been strong enough to deal with the heckling fans.

“I apologise to the nation. The Prime Minister’s wife (Datin Seri Rosmah Mansor) was present among the spectators and I am sorry that this happened,” said Rexy.

“The fans have the right to feel unhappy over our players’ performances. Our players did not do well and I take responsibility of their performances. Fairuzizuan should have remained calm and should not have reacted even though what the fan said was unacceptable.

“He did not behave as a world-class player. He has to pay for this behaviour and we will deal with that later. For now, I will have some homework to do.

“I will have to decide whether I want to field them (Fairuzizuan and Zakry) for the next tie or whether to send in a scratch combination.”

A teary-eyed Fairuzizuan was apologetic at the press conference.

“I was under tremendous pressure and that did not help when the fans were not on my side. I was cool about it until this one particular fan showed the sign. I reacted … I am sorry for that,” he said.

World No. 1 Lee Chong Wei had given Malaysia a great start in the tie, scoring a convincing 21-12, 21-13 win over Kenichi Tago.

“It was a good win for me but it was unfortunate that we lost. I hope the fans will be more supportive and not turn against us when we are down,” said Chong Wei.

A disappointed Choong Hann, who was recalled to don national colours after a two-year lapse, said it was not his lack of fitness that let him down.

“I was hesitant and was uncomfortable with the way I played. I was playing against Sasaki for the first time and he did well to play a patient game,” said the world No. 16.

Japan’s doubles chief coach Park Joo-bong said that their plan was to win two singles matches and one doubles.

“But we were surprised with Sasaki’s win. We had expected Tago to pull off a surprise for us,” he said.

“Sasaki made all the difference for us. We thought that experience would take Choong Hann through but he did not look good physically. He was sending half-court returns. This is a great day for Japan.”