Hope Datuk Lee Chong Wei 李宗伟 able to excel in Olympic without any stress now as he’s no longer World No.1 so there’s nothing to hold back and just perform as what he could to win the 1st Olympic gold for Malaysia in August @ London Olympic 2012. 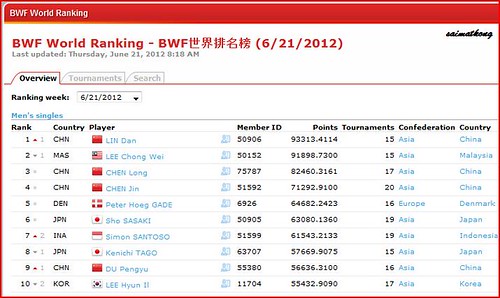 Chong Wei dethroned as world No. 1 after four years

KUALA LUMPUR: It’s over. Lee Chong Wei has finally been dethroned as the world No. 1 after four years at the pinnacle.

For Chong Wei, this is yet another setback that has plagued his preparation for the London Olympic Games next month.

In the latest ranking list released by the World Badminton Federation (BWF) yesterday, China’s Lin Dan, a four-time world champion, is back in familiar territory as the world No. 1, pushing Chong Wei to the second spot.

He slipped to second spot because of his absence in international tournaments following an injury to his ankle at the Thomas Cup Finals in Wuhan recently.

He lost valuable ranking points after failing to defend his title at last week’s Indonesian Open.

The drop in the ranking, however, will not affect Chong Wei’s seeding as the top player at the Olympics as the seedings had been done earlier based on the May 3 world ranking.

The 29-year-old Chong Wei had held the No. 1 spot since Aug 21, 2008 – a week after his lopsided loss to Lin Dan in the final of the Beijing Olympic Games.

Chong Wei, still recovering from his ankle injury, is scrambling to regain his form. This has raised doubts about his chances of challenging his nemesis and defending champion Lin Dan for the gold medal at the Olympics.

Some, however, see the setbacks – injury and drop in world ranking – as a blessing in disguise, saying it would drastically reduce the pressure on him as he tries to end the country’s elusive chase for a gold medal in his third Olympic outing.

Meanwhile, there was some good news for Olympic-bound Koo Kien Keat-Tan Boon Heong when they moved up two rungs to occupy the sixth spot in the world rankings in the men’s doubles while the mixed doubles pair of Chan Peng Soon-Goh Liu Ying remained at No. 8.


Get your Samsung Galaxy SIII with Celcom 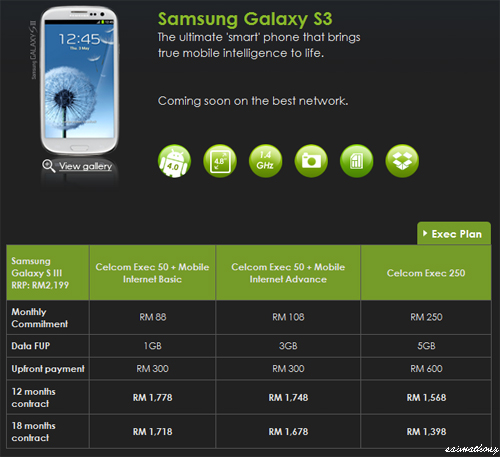 With Celcom you can get this one-of-a-kind phone from as low as RM1,398. That’s a lot of savings!

It is offered with a shorter choice of 12 months and 18 months contract with Celcom Exec 50 with 1GB data, 3GB data and Celcom Exec 250 which comes with 5GB of data.