I would suggest everyone of you carry a pepper spray with you for your safety if you always need to travel alone especially at the car park! 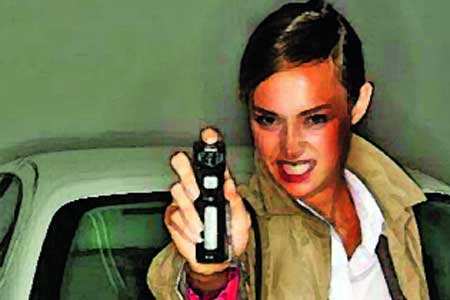 Pepper spray is an inflammatory agent. It causes immediate closing of the eyes, difficulty breathing, runny nose, and coughing. The duration of its effects depends on the strength of the spray but the average full effect lasts around thirty to forty-five minutes, with diminished effects lasting for hours.

So don’t take the risk and you may want to get 1 pepper spray for your loved one as a preventive measure so that no one else will be another victim.

The victim being helped by staff and customers from the mall soon after the incident. She suffered injuries to her head and face, and was rushed to University Malaya Medical Centre.

KUALA LUMPUR: A WOMAN was robbed and slashed on her head at the car park of Mid Valley Megamall here on Friday evening.

The 10.30pm incident, which happened not far from an entrance to a cinema, was the third robbery at major shopping complex car parks in the Klang Valley over the past month.

All three cases involved female victims who were walking alone.

A witness, who declined to be named, said the victim was found by shoppers who then alerted the mall’s security officers.

The victim was found leaning against a wall with blood gushing from her head. She was also injured on her hands, believed to be defensive wounds.

“The woman was too traumatised, her hands were shaking. She could only tell the security guards that she had been robbed,” said the witness.

It was learnt that the victim was only several metres away from her parked car when she was attacked. However, the car was not stolen.

“The victim was given immediate assistance by our staff and cistomers at the mall soon after the incident.

“She suffered injuries to her head and face, and was rushed to University Malaya Medical Centre in an ambulance,” Tan said in a statement last night.

The victim was discharged from the hospital yesterday morning.

“We learnt that the victim lost her i-Phone, a small amount of cash, her identity card, driving licence and bank cards, in the incident.

“The mall management will extend its full cooperation to facilitate investigations.”

Yet another lone woman attacked and robbed

KUALA LUMPUR: Lone women approaching their cars appear to be the target of armed robbers.

In the past few weeks, there have been several cases of unaccompanied woman who were attacked by armed assailants.

The most recent is that of a woman who nearly had her finger severed by an armed robber near Taman Tun Dr Ismail here. The incident occurred at around 6.30am yesterday.

“The man who was of dark complexion brandished a knife and demanded for her valuables and handbag,” said Brickfields OCPD Asst Comm Wan Abdul Bari Wan Abdul Khalid.

“The woman had stopped in front of a friend’s house in Jalan Datuk Sulaiman when she was approached by the man on a motorcycle.”

ACP Wan Abdul Bari said a scuffle broke out between the two and her finger was almost severed when he tried to slash her. He got away with her handbag eventually.

Just 32 hours earlier, another woman was attacked and robbed about 9km away while walking in the carpark of a mall here.

“We received a report that the woman in her 20s was slashed on her head when she was about to get into her car at the Mid Valley Megamall on Friday,” he said.

He said the woman had just alighted the lift near the cineplex at around 10pm when she was approached by a man armed with a sharp object.

“She struggled with the man who tried to grab her handbag but she relented when the man slashed her on the head,” he said, adding that the woman lodged the police report at around 4am yesterday.

ACP Wan Abdul Bari said police were investigating the cases under Section 395 of the Penal Code for armed robbery and urged anyone with information to come forward.

Mid Valley City Sdn Bhd’s management said the woman was sent to the University Malaya Medical Centre in an ambulance 25 minutes after the incident. She was discharged the next morning.

“Her loss consists of an iPhone, a wallet with cash, the victim’s identity card, her driving licence and bank cards,” it said.

CCTV footage of the attack and robbery had been sent to the authorities, it said.

The cases of women being targeted by robbers came to light when Internet marketeer Chin Xin-Ci posted on Facebook about her attack and near abduction by two men at a shopping mall car park on May 27.