Home » Blog » What are you willing to do to save the planet? Support Earth Hour 2012!

What are you willing to do to save the planet? Support Earth Hour 2012!

In 2007, WWF-Australia inspired Sydney-siders to show their support for climate change action in the first ever Earth Hour event. It showed that everyone, from children to CEOs and politicians, has the power to change the world they live in. In Sydney, Australia, 2.2 million individuals and more than 2,000 businesses turned their lights out for one hour to take a stand against climate change.

In 2008, the plan was to take Earth Hour to the rest of Australia. But then the City of Toronto , Canada, signed up and it wasn’t long before 35 countries and almost 400 cities and towns were part of the event. It said something compelling to the world: that the climate challenges facing our planet are so significant that change needs to be global.

With the invitation to ‘switch off’ extended to everyone, Earth Hour quickly became an annual global event. It’s scheduled on the last Saturday of every March – closely coinciding with the equinox to ensure most cities are in darkness as it rolled out around the Earth.

In 2011, Earth Hour saw hundreds of millions of people across 135 countries switch off for an hour. But it also marked the start of something new – going Beyond the Hour to commit to lasting action on climate change. And with the power of social networks behind the Earth Hour message, we hope to attract even more participation so we can build a truly global community committed to creating a more sustainable planet.

We only have one planet. You can help protect it. Participate in the world’s largest single campaign for the planet: Earth Hour. It starts by turning off your lights for an hour at 8:30 pm on March 31, 2012 in a collective display of commitment to a better future for the planet. Think what can be achieved when we all come together for a common cause.

Why is your participation important?

Our future depends on it. Across the world, biodiversity and natural habitats are disappearing at a greater rate than ever before. We are depleting the earth of wild animals, water, wood and other natural resources faster than they can be replenished; polluting and altering natural habitats and changing the entire planet’s climate.

Things will only worsen if we continue in the same direction.

Earth Hour raises awareness of sustainability issues. But there’s more to it than switching off lights for one hour once a year. It’s about giving people a voice and working together to create a better future for our planet.

I DARE YOU TO SAVE THE PLANET!

This Earth Hour 2012: 8.30pm, Saturday 31 March, celebrate your action for the planet with the people of world by switching off your lights for an hour, then go beyond the hour. 爱护地球，请大家也一起熄灯一小时!

Earth Hour is about taking simple steps everyday that collectively reduce carbon emissions – from businesses turning off their lights when their offices are empty to households turning off appliances rather than leaving them on standby.

What are you willing to do to save the planet?

Here are 10 different ways to spend Earth Hour and reduce your carbon footprint:

1. Attend a local Earth Hour event or organise your own by throwing an Earth Hour street party with your neighbours (KLCC, Sunway Pyramid, Sg Wang etc)
2. Gather family & friends for a night picnic in your local park and look at the stars
3. Enjoy a family dinner by candlelight
4. Organise a treasure hunt in the dark
5. Take the dog for a night walk
6. Have a candle-lit bath
7. Sit in the dark and share stories
8. Organise a family night playing board games
9. Share a romantic night in with your loved one
10. Upload your ‘on the night’ photos and videos to flickr and YouTube respectively, and then add them to the Earth Hour flickr group and the global YouTube Group. 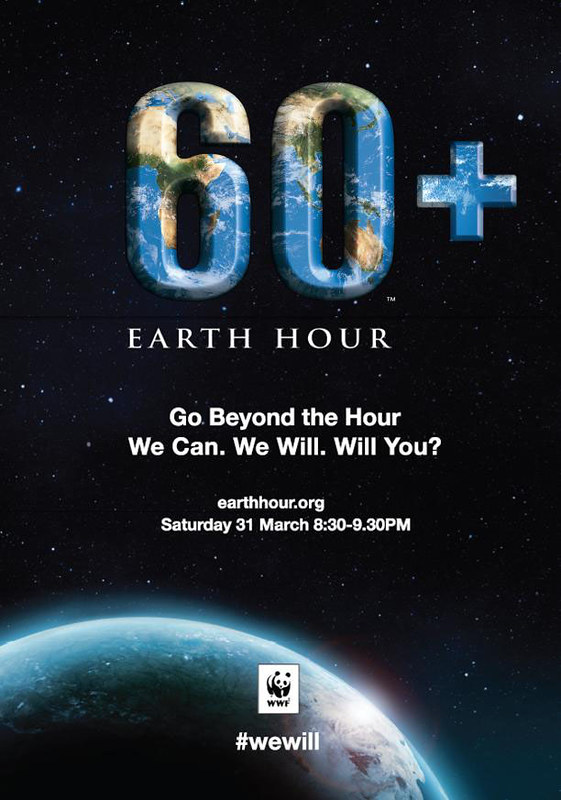 – Switch off unnecessary lights!
– Switch off air-cond!
– Turn off and unplug all equipment at home when not in use!
– Last but not least please take care and be alert as crime might happen during this Earth Hour as most places are dark so please be caution of your own safety too! 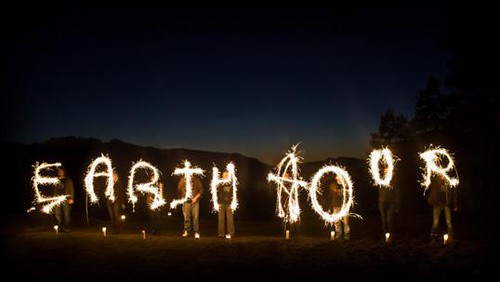 I Love You (My Dear Earth!) – You may attempt to do light drawing during the Earth Hour and I think it will be fun too! =)