Home » Blog » Roti canai and teh tarik for RM1

Roti canai and teh tarik for RM1

Wow, can you believe it? It’s only RM1 for Roti Canai and Teh Tarik… Where else can you get it? Now most store is selling almost double the amount, the price hike was set after the petrol increase last year but then after that the petrol price reduce they refuse to reduce, is that the way to do business? ah.. this will set another standard for other mamak to follow! It’s good for us, the consumers. Hurray. =)

KUALA LUMPUR: Fancy a roti canai and a teh tarik for RM1 – right in the heart of the city and in these tough economic times?

That is what you will get over at the Ukhwah Restoran Rakyat 1Malaysia in busy Lorong Medan Tuanku Satu (located next to Prescott Inn).

A piece of roti canai at the outlet costs 40 sen and a glass of teh tarik is priced at 60 sen. 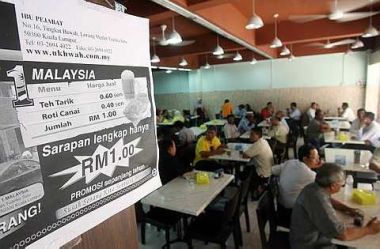 Laughably cheap: The lunch crowd at the restaurant in Medan Tuanku yesterday and the price of a ‘complete breakfast’ in the foreground at left.

“I am happy as long as they do not increase the price,” said Marcus Wong, a customer who works nearby, who paid RM3 for a plate of chicken rice and RM1.50 for a can of Coke with ice.

His colleague C.K. Ng paid RM4 for a bowl of mixed tom yam soup and 80 sen for a glass of iced tea.

The restaurant, run by Koperasi Pendidikan Islam Malaysia Bhd, or known as Ukhwah, is not profit-oriented.

It is operated in the spirit of co-operatives – to serve people.

Ukhwah president Datuk Rahim Baba helps clear and clean the tables during peak hours since it opened for operations on Monday.

Only three days into operation, Rahim said mamak restaurants in the area have sent a clear message to him to “please maintain the market price of food”.

However, Rahim will not budge, because he believes food should be reasonably priced.

“I am still making money selling roti canai at 40 sen a piece. I make less compared to other restaurants,” he said.

To break even, the restaurant needs RM2,000-a-day or RM45,000-a-month in sales to cover the fixed costs of the RM7,000 rental per month for the premises and the salary of the 16 staff members, who are all locals.

“Food is a basic need. I don’t believe one should pay a lot for food. Most restaurants make 200% to 300% profit from selling food,’’ he said.

The restaurant operations are also based on family concept.

“Everybody comes to work as a family, with honesty and loyalty in their mind. If I am short of staff, I can always mobilise others from the cooperatives to help out,” he said.

Ukhwah, which was set up in 1998, is also involved in property, finance, the pawn business and other sectors.

It now has more than 50,000 members and they contribute a minimum of RM10 a month and receive a 10% dividend on their contributions.