Prince William and Kate Middleton Show Off Royal Baby Boy! Congratulations have poured in from around the globe for the baby, a great-grandchild of Queen Elizabeth II who will one day reign over Britain and 15 other Commonwealth realms.

Officially at least the baby remains nameless, although the palace has said its names will be released “in due course”. George and James, traditional names that hark back to previous kings, have emerged as the favourites following feverish betting

Kate, Duchess of Cambridge holds the Prince of Cambridge, Tuesday July 23, 2013, as they pose for photographers outside St. Mary’s Hospital exclusive Lindo Wing in London where the Duchess gave birth on Monday July 22.

Kate, the Duchess of Cambridge, carries her new born son, the Prince of Cambridge, who was born on Monday into public view for the first time outside the Lindo Wing of St. Mary’s Hospita, in London, Tuesday, July 23, 2013. The boy will be third in line to the Brithis throne.

Britian’s Prince William carries his new born son, the Prince of Cambridge, who was born on Monday into public view for the first time outside the Lindo Wing of St. Mary’s Hospital, in London, Tuesday, July 23, 2013. The boy will be third in line to to the British throne.

Safe in the hands of the Duchess of Cambridge, the Royal couple and their son who was born Monday, leave the Lindo Wing of St Mary’s Hospital in west London Tuesday July 23, 2013. 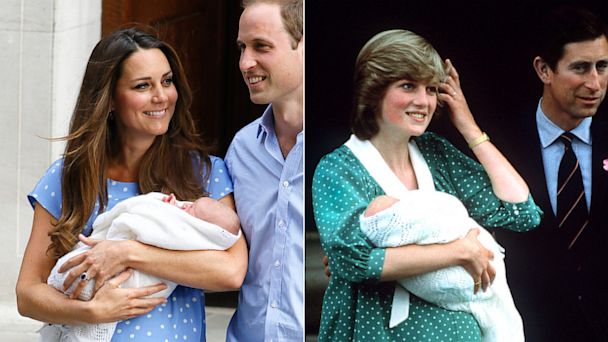 When Prince William and Kate Middleton emerged from St. Mary’s Hospital to present their newborn son to the world, the Duchess of Cambridge seemed to be paying a small tribute to the late Princess Diana in her wardrobe choice.

Holding the tiny Prince of Cambridge, whose name has yet to be announced, in her arms, Kate walked out of the Lindo Wing of the London hospital wearing a simple pale, baby blue dress covered in white polka dots. According to Glamour UK, the dress was by designer Jenny Packham.

Thoughts of some observers immediately jumped back to that day 31 years ago in June 1982, when it was Prince Charles and Diana who came out of the same hospital wing, holding baby William. On that day, Diana wore a teal, flowy dress, also covered in white polka dots.

The large waiting crowds cheer on July 22, 2013 at the announcement of the birth of a baby boy, at 4:24 pm to Prince William and Catherine, Duchess of Cambridge, at St Mary’s Hospital

Britain’s Prince William and his wife Kate proudly showed off their newborn baby son to the world for the first time on Tuesday, cradling the future king in their arms as they left hospital to go home.

A smiling Kate told the massed ranks of international media that motherhood was “very emotional”, while William said they were still choosing a name and joked that he already changed the baby’s nappy.

The new third-in-line to the throne raised a tiny hand above his white blankets but remained peaceful, despite deafening cheers from well-wishers and the shouts of photographers outside St Mary’s Hospital in London.

“It’s a special time,” said the 31-year-old Duchess of Cambridge, who was wearing a cornflower-blue dress with her brown hair flowing loose. “I think any new parent would know what this feeling feels like.”

The duke, also 31, told reporters that “he’s got her looks, thankfully” as Kate playfully demurred, then added: “He’s got a good pair of lungs on him, that’s for sure.”

The royal baby’s birth at 4:24pm (1524 GMT) on Monday sparked a global media frenzy, fuelled by the fascination that has surrounded the couple ever since they married in April 2011.

Congratulations have poured in from around the globe for the baby, a great-grandchild of Queen Elizabeth II, who is will one day reign over Britain and 15 other Commonwealth realms around the world.

Kate initially held the baby as the royal couple emerged from the front door of the hospital’s exclusive private Lindo Wing, before passing him to her husband, who was dressed in a blue shirt and jeans.

The scene was reminiscent of when William was introduced to the world by his parents Prince Charles and the late Princess Diana outside the same hospital wing in 1982.

Balding William joked that despite the baby boy’s own thin coating of hair “he’s got way more than me, thank God”.

Asked about changing the nappies of his son, who weighed in at a healthy eight pounds six ounces (3.8 kilograms) when he was born, the prince said: “We’ve done that already.”

The traditional names George and James have been favoured by bookmakers as fit for a king, but the royal couple gave nothing away.

“We are still working on a name so we will have that as soon as we can,” William said.

After speaking briefly to the press, the royal couple re-emerged from the hospital with their son in a car seat before driving back to their home at Kensington Palace.

Kate’s sister Pippa was reportedly waiting for them at the palace.

Hordes of journalists had camped outside the hospital for three weeks waiting for the baby, testament to the enduring appeal of the British monarchy and particularly the glamorous William and Kate.

There was a brief fracas when a young man tried to burst through the press pack to get closer to the action, and was dragged away, kicking, by a policeman, according to an AFP photographer.

Cannon fire salutes rang out on Tuesday at the Tower of London and Green Park in celebration of the royal birth, while the bells at the 11th century Westminster Abbey pealed across the capital for three hours.

The couple had earlier received their first visitors when Kate’s parents Michael and Carole Middleton, self-made millionaires who run a party supplies business, arrived in a humble black London taxi.

Charles arrived around two hours later with his second wife Camilla in a chauffeur-driven limousine.

At Buckingham Palace, crowds straining for a glimpse of the official birth announcement on a gold easel in the forecourt were treated to a special edition of the Changing the Guard ceremony featuring the Cliff Richard song “Congratulations.”

The baby will be titled His Royal Highness, Prince (name) of Cambridge — the blank to be filled in when his name is announced.

William’s name was not announced for a week, while the world had to wait a whole month when Charles was born in 1948.

William and Kate did not know the sex of their child until he was born, although the duchess reportedly told a soldier at a St Patrick’s Day parade in March: “I’d like to have a boy and William would like a girl.”

It is the first time since 1894 that three direct heirs to the throne have been alive at the same time, and the 87-year-old queen said she was “delighted” at the birth of her third great-grandchild, reportedly telling a guest at a palace function that “the first born is very special”.

William and Kate are hugely popular and have been widely credited with revitalising the British royals following decades of scandal and the death of William’s mother Diana in a car crash in 1997.

“Maximum by 2044 he may make politics a career and start contesting elections,” he said. “I’m seeing very strong changes in the monarchy.”