Did you receive chain email letter asking you to boycott Petronas so that they will reduce the fule/petrol price? I myself receive a lot in my different-different mail box but I do not forward it and don’t think it will work and it will only affect the economy? The email title “Let’s get those fuel prices down”… If you receive it do not forward! 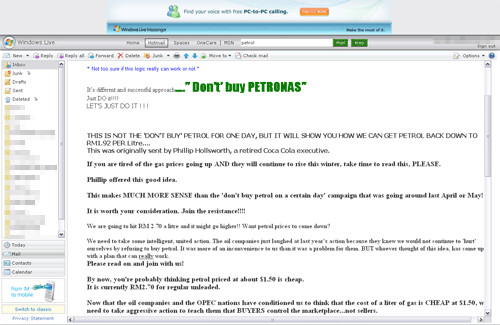 * Not too sure if this logic really can work or not *

THIS IS NOT THE ‘DON’T BUY’ PETROL FOR ONE DAY, BUT IT WILL SHOW YOU HOW WE CAN GET PETROL BACK DOWN TO RM1.92 PER Litre….
This was originally sent by Phillip Hollsworth, a retired Coca Cola executive.

If you are tired of the gas prices going up AND they will continue to rise this winter, take time to read this, PLEASE.

This makes MUCH MORE SENSE than the ‘don’t buy petrol on a certain day’ campaign that was going around last April or May!

It is worth your consideration. Join the resistance!!!!

We are going to hit RM 2.70 a litre and it might go higher!! Want petrol prices to come down?

We need to take some intelligent, united action. The oil companies just laughed at last year’s action because they knew we would not continue to ‘hurt’ ourselves by refusing to buy petrol. It was more of an inconvenience to us than it was a problem for them. BUT whoever thought of this idea, has come up with a plan that can really work.
Please read on and join with us!

By now, you’re probably thinking petrol priced at about $1.50 is cheap.
It is currently RM2.70 for regular unleaded.

Now that the oil companies and the OPEC nations have conditioned us to think that the cost of a liter of gas is CHEAP at $1.50, we need to take aggressive action to teach them that BUYERS control the marketplace…not sellers.

With the price of gasoline going up more each day, we consumers need to take action.

The only way we are going to see the price of petrol come down is if we hit someone in the pocketbook by not purchasing their petrol! And, we can do that WITHOUT hurting ourselves.

How? Since we all rely on our cars, we can’t just stop buying petrol.

But we CAN have an impact on petrol prices if we all act together to force a price war.

Here’s the idea: For the rest of this year, DON’T purchase ANY petrol from Petronas
the biggest price-up driver company.

But to have an impact, we need to reach literally millions of Petronas petrol buyers. It’s SO simple!
Now, don’t wimp out on me at this point…keep reading and I’ll explain how simple it is to reach millions and even BILLIONS of people!!

Unbelievable?? Do the math and see for yourself!
Again, all you have to do is send this to 20 people. That’s all!
I’ll bet you didn’t think we had that much potential, did you!
Acting together we can make a difference..

If this message makes sense to you, then please pass it on.
THEY will LOWER THEIR PRICES TO BELOW THE RM1.92 RANGE AND KEEP THEM DOWN.
THIS CAN REALLY WORK.

It’s simple – send the message along to others and choose to not buy petrol from Petronas.
TWENTY FIVE POINT SIX BILLION people:

KUALA LUMPUR: Petronas has urged the public not to join an e-mail campaign to boycott its products because it will not affect fuel prices.

Its president and chief executive officer Tan Sri Mohd Hassan Marican said Petronas was not the largest retailer of fuel in the country as it only has about 800 stations nationwide.

“Any form of boycott will only hurt the station owners, the small and medium-seized enterprises that supply the stations with their products and the shareholders of Petronas Dagangan – many of whom are pensioners,” he said in an interview.

Petronas stations account for about 30% of fuel sold in the country. The largest retail station owner is Shell with over 1,200 stations.

An e-mail has been circulating calling on the public to boycott Petronas stations and its products. The e-mail claimed that a similar boycott was carried out in the United States against another petroleum company and it succeeded in forcing the company to reduce its prices.

Hassan said that Petronas had no say over fuel prices as they were determined by the Government.

He said Petronas as a corporation would not be unduly affected by such a boycott as Petronas Dagangan accounted for less than 5% of its revenue.

Hassan also said the country had to import 80,000 barrels of petrol every day because the refineries in the country did not produce enough.

“We are an exporter of diesel and jet fuel because of the composition of the Tapis sweet light crude that we produce. Any boycott will only benefit the foreign oil companies who operate here.”

It is learnt that some foreign oil companies own the stations directly from overseas even though they have local units here.

Asked why Petronas was not making more money now that the Government had increased the pump prices, Hassan said oil companies always sells fuel at market rate and it was the Government that paid the subsidies to these firms.

“Our profits remain the same and we do not benefit from any increase or reduction of fuel prices.”

Today Petronas also say their secret account is all public and will reveal all their earning and publish in their annual report. So there’s no more secret. But in Malaysiakini, Petronas was instructed to reveal all the accounts to the public.

Petronas ‘must bare all’
Rahmah Ghazali | Jun 16, 08 8:12pm
A civil society group today described the government’s decision to reveal the accounts of national oil company Petronas – which has been a well-kept secret for over three decades – as “strange”.

– Reveal all, from 1974 till today
– Khairy takes ‘opportunistic’ stand

It is also report in TheStar that Petronas Claimed their report is public and there’s no secret. So which and who is true and telling the truth?

KUALA LUMPUR: Petronas has been publishing its annual report for the past 18 years and it is easily available, including on its website, said its president and chief executive officer Tan Sri Mohd Hassan Marican.

“We print 5,000 copies of the report every year even though we are legally required to publish only two. We distribute the report to the Parliament library, ministries and even the media,” he said in an interview.

Replying to queries by various quarters that the national petroleum corporation’s accounts were not made public, Hassan said yesterday that this was not true and it was just that certain people “refused to look for iteven though it is easily available.”

”If they cannot find one of the 5,000 copies we’ve printed, then they should have searched our website under the heading ‘Investors Relations’ in the Corporate webpage.

“The accounts from 2002 to last year are listed there.

“We have got nothing to hide. When I joined the corporation in 1990, I told my then boss the late Tan Sri Azizan (Zainul Abidin) that we have to publish an annual report if we are to be a global petroleum player,” he added.

A copy of the 2007 annual report was made available to The Star last April. The 165-page report has 84 pages dedicated to Petronas’ financial statements.

The report not only states the accounts but also gives five-year financial highlights, review of its business and even its corporate sustainability targets, including its role in protecting the environment.

Hassan said the standard of the report surpassed the requirements of the Companies Commission of Malaysia.

“We behave like a public-listed company in publishing our report. I do not understand why people say that our report is not made public.

“By law all companies are required to submit their accounts to the commission and if they cannot get a copy of our report then they should have extracted a copy from the commission,” he added.

Opposition leaders and several Barisan Nasional backbenchers had called for Petronas’ accounts to be made public.

The calls were made following the government’s decision to raise the price of petrol by 78 sen to RM2.70 per litre and diesel by RM1 to RM2.58 per litre.