MTV World Stage is a global series that brings multi-genre talents with global relevance to an audience in over 550 million households. Recorded “live” at the most exclusive gigs, world renowned music festivals and unique concert locations from around the world, MTV World Stage is the “front row seat” for music lovers to experience the biggest artists on the globe without leaving the comfort of their sofas.

Yes! The most awaited concert is here! The MTV World Stage 2010 will be happening this Saturday @ Sunway Lagoon Surf Beach, Malaysia, are you ready to party? 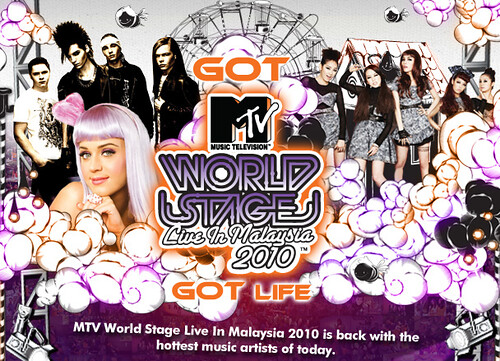 MTV World Stage 2010 will be featuring Katy Perry, Tokio Hotel, Wonder Girls and our local boys Bunkface altogether to perform in the same night at Sunway Lagoon Resort in Malaysia!

Pop icon Katy Perry is well-known for louder than life performances in her eccentric outfits and of course, infectious pop songs. Katy’s debut album One of The Boys hit the charts and went platinum in the UK, US and Australia, and double platinum in Canada. Over 5 million copies of the album have been sold with many smashing singles including “I Kissed A Girl,” “Hot N Cold,” “Thinking Of You” and “Waking Up In Vegas.”

During the recent MTV Movie Awards 2010, Katy Perry performed her latest single “California Gurls.” Stealing the show, Katy gave California a new theme song and a new sense of cool with her sparkling outfit and heart pumping dance moves. The single “California Gurls” has been No. 1 on Billboard Digital Songs for week of June 12, 2010 and is also now No. 1 on Billboard Hot 100. The song will be featured in her upcoming album Teenage Dream, slated for release on 24 August 2010 (in US and Canada) and 30 August 2010 (for the rest of the world).

Tokio Hotel, the biggest act to come out of Germany in 20 years, has gone a stunning 45x platinum and 65x gold, scored five No. 1 singles and three No. 1 albums. Their rocket to success launched in 2001 when Bill Kaulitz and his twin brother Tom – the band’s hip-hop-tinged guitarist – formed the band along with bassist Georg Listing, and drummer Gustav Schaefer.

In 2005, they released their German debut album Schrei, including their worldwide hit single “Durch den Monsun (Monsoon).” since then they’ve caught on like wild fire and gained the attention of an entire generation. In France, the group’s popularity exploded. They went from playing small club gigs for 500 to performing at the foot of the Eiffel Tower for a crowd of 500,000 screaming fans phonetically belting out the words to Tokio Hotel’s German hits. Soon after they made history by becoming the first German band to score a No. 1 hit on the Israeli radio charts and in 2007, Tokio Hotel received their first MTV Europe Music Award. Over the last few years, the four rock stars won almost anything a group could possibly win in Europe (a total of 36 awards) including two further MTV Europe Music Awards for Best Headliner (2008) and Best Group (2009). Even in the US, Tokio Hotel scored big time! They received an MTV Video Music Award in Los Angeles for Best New Artist (2008) and from South America they took home an incredible four MTV Latin Music Awards in 2008, amongst others in the categories Best International Newcomer and Best Song (Monsoon).

Tokio Hotel’s current album Humanoid – including their hit singles “Automatic” and “World Behind My Wall” – topped the German charts right from day one and entered at No. 2 in the Billboard European Album Charts. To date, Tokio Hotel has sold more than 7 million records worldwide.

Asian pop sensation Wonder Girls are South Korea’s girl group (made up of Sun, Yenny, Yubin, Lim and Sohee) who has become the very first Korean group from Asia to enter Billboard Hot 100 in 30 years. The Wonder Girls were introduced through the channel’s programme called MTV Wonder Girls which was filmed and directed by MTV Korea. Debuted in 2007, the Wonder Girls became very popular with their songs “Tell Me,” “So Hot” and “Nobody.” The infectious hit “Nobody” peaked at No. 76 on the Billboard Hot 100, No. 4 on Billboard Heatseekers Song, and No. 1 on Billboard 2009 Year-End Hot Singles Sales chart, which rose the girls to instant fame. “Nobody” sold over 32,000 albums, was downloaded over 30,000 times on the internet, and has over 13 million views to-date on across popular social media platforms.
With their rising success, Wonder Girls opened the U.S. leg of The Jonas Brothers World Tour last year (along with Honor Society and Jordin Sparks) for over 50 concerts in North America. From June 4 to July 20, 2010, Wonder Girls is having their their own U.S. tour concert called ‘Wonder Girls World Tour’. Their accolades won in 2009 included Artist Of The Year at the Seoul Music Awards, Best Asia Artist Of The Year at MTV Style Gala in China and Group Of The Year at the 6th Annual Korean Music Awards.

Vocalist Sam, bass guitarist Youk and lead guitarist Paan are the young Klang lads who formed Bunkface in 2005. In only a year, they have won two Battle of the Bands organized by ROTTW and University Malaya respectively. Their first song “Silly Lily”was No. 1 on FLY FM’s Campur Chart for an astounding 10 weeks in a row. The new indie rock band stormed on to the local scene when they swept 3 Shout! Awards – Rockstar, Breakout and Ultimate – last year. Bunkface then went on to win Most Popular Group/Duo award at Anugerah Bintang Popular Berita Harian 2009. The band continues to gain accolades in 2010, winning an AVIMA award for Best Rock Vocalist. At the 2010 AIM17 Awards, they picked up Best Rock Song for “Situasi” and the Anugerah Kembara, an award which honors musicians who have taken their music beyond Malaysian shores. This unstoppable group recently released their first full-album Phobia Phoney in March. The local indie band’s most popular songs include “Bunk Anthem,” “Situasi,” “Extravaganza,” “Prom Queen” and “Revolusi.”

Have you got your tickets yet? If not don’t be too sad… =p Here, I will tell you how you can get / win tickets to this awesome MTV World Stage Live.

Want to know when you can win passes and get all the latest updates on MTV World Stage Live In Malaysia 2010? Follow MTVAsia on Twitter. If not you may try your luck to check who is selling this MTV World Stage Ticket here or you can also purchase your ticket here.

Want to join in the Twitter buzz? Hashtag your tweets with #worldstagemy and your tweets will appear in worldstage.mtvasia.com official page! Join MTV Asia Facebook page here.