KUALA LUMPUR: Mimos Bhd’s Mak Cik PC (or Aunty PC, translated from the Bahasa Malaysia), a prototype, has spawned a new computer that will appeal to the younger crowd.

The research organisation has signed a memorandum of understanding with local PC manufacturer, FTEC Systems Sdn Bhd, to jointly develop this other version of the Mak Cik PC.

It is called Idola (Idol, in English) — which stands for Internet Device for Learning Applications. The venture is primarily for product development and commercialisation of the ultra-portable computer.

Mimos will be transfering researched technologies to FTEC to aid in the further development of Idola.

Developed in collaboration with Intel, Idola will be targeted at the lifestyle market and education sector, as well as users with a limited budget who need basic computing capabilities and Internet access.

IPv6 is the next generation protocol designed to replace the current IPv4 technology which is close to 20 years old. IPv6 fixes a number of problems in IPv4, such as the limited number of available IPv4 addresses.

Earlier, the Mak Cik PC spawned the Jen-ii — a device with simple computing functions that will be used to introduce the Internet to senior citizens.

Jen-ii, which will be priced at less than RM500, makes it easy for its users to create online communities — where they can, for example, compare grocery prices, attend religious classes online and exchange e-mail.

Idola, on the other hand, delivers full-fledged computing capabilities; everything from wordprocessing to computer games.

“There must be an element of fun in the Idola for it to appeal to the younger crowd. After all, new teaching methods are geared towards fun,” said Mimos chief executive officer Datuk Abdul Wahab Abdullah at a press conference after the MOU signing.

Despite Idola’s minimalist design, a demonstration of the device showed that it is able to handle 3D graphics as capably as any personal computer today. “It can definitely handle more than just Solitaire,” quipped FTEC Resources Bhd managing director Tang Boon Koon, who was referring to a basic Windows game.

He said Idola’s battery can last up to six hours on a full charge and the computer weighs only 0.8kg — “it is one of the thinnest Internet devices in the market.”

Tang said FTEC plans to sell the notebook for US$299 (RM987). “We’re also looking for the right place to manufacture the product so that we can maintain that sub-RM1,000 price,” he said.

Idola is expected to be on the Malaysian market in the first quarter of next year. “We also hope to push it to other countries in the South-East Asian region, as well as the Middle East,” Tang said.

There are other ultra portables in the market now, such as Asus’ Eee PC (RM1,299), but Mimos believes the Idola is even more fuss-free. “The technology is not that complicated and we’ve come up with a sleek and simple design,” Wahab said.

Mimos’ Mak Cik PC, which was unveiled last year, is seen as a solution that can help bridge the “digital divide,” that gap between the technology haves and have-nots. It is also easily customised to suit specific market segments. 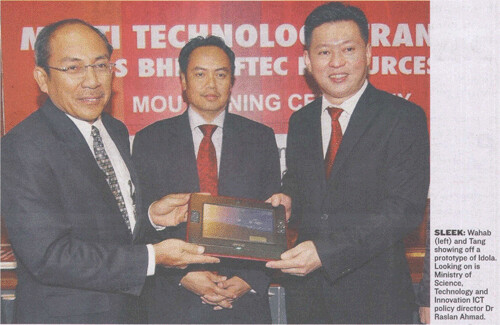 LUSAKA (Zambia): Three months from now, Malaysians will be able to buy the i-Dola laptop and Jean-i personal computer (PC) at basement prices.

Mimos is now ready to licence the production of the Malaysian computer codenamed Mak Cik, which it took two years to develop. The laptop and PC are named after the Prime Minister and his wife.

“I have tested the computers and am happy with their performance,” said Dr Ongkili, who was here to attend the Global Southern Africa International Dialogue.

“They are wireless, Internet-based designs and need not be connected to fixed lines. To reduce costs, they do not have hard discs. You use a thumb drive instead.”

It is understood that the i-Dola and Jean-i will be as fast as computers using Intel Pentium 4 processors.

Dr Ongkili said that the King and Queen have already been presented with a pair of i-Dola laptops, which were previewed at the WCIT in Kuala Lumpur recently.

He added that several manufacturers were keen to make the computers, and were targeting selling about a million of them.

“The computers require broadband access and I have told the relevant bodies to speed up the roll-out of broadband coverage,” Dr Ongkili said.

He said the computers are targeted at students, businesses and housewives.

He revealed that Zambia and five other African nations have expressed interest in making the computer. In Zambia, laptops cost as much as US$3,000 (RM9,600).

wow, we have Malaysian made computer Desktop and Laptop soon. Named after Prime Minister, (Pak Lah) and his wife (Jean).
But I guess with the cost it can’t make wonders but of coz I’m still very interested to see this PC and hopefully if it’s good and cheap I will definitely get one for myself =)