WONG Mew Choo had only herself to blame for letting slip the chance to get into the medals playoff of the women’s singles badminton competition at the Beijing University of Technology Gymnasium last night.

She held a total of nine game points in the second game of her quarter-final match against Lu Lan but was unable to force the Chinese third seed to a rubber game and lost the match 7-21, 27-29.

Mew Choo, who was the first Malaysian woman to qualify for an Olympic quarter-final, had no answer to the Lu Lan’s aggression in the first game and conceded defeat in 14 minutes.

But it was a different Mew Choo as she forced herself back in contention in the next game.

She caught up with Lu Lan at 8-8 and held game point at 20-15. But she could not close the game, allowing her rival to win five straight points to force deuce.

The battle continued but it was not to be Mew Choo’s night. She bowed out in straight games and there will be an all-China semi-final between Lu Lan and top seed Xie Xingfang, who beat Xu Huaiwen of Germany 21-19, 22-20.

The other semi-final is between defending champion Zhang Ning of China and Indonesian Maria Kristin Yulianti.

“I was not certain where to place the shuttle at that time. My heart was in the game but my arms could not respond. Lu Lan caught up and gained confidence. I tried but could not nail that one point,” said the eighth seeded Mew Choo, who was featuring in her first Olympics.

“It’s disappointing but I am satisfied with my outing in Beijing. My objective was to reach the quarter-finals and I did it.”
Source : TheStar 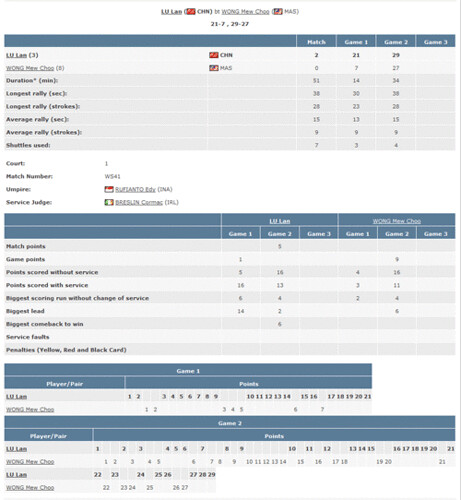 The national number one women’s singles shuttler lost 7-12, 25-27 in the quarter-finals to third seeded Lu Lan from China.

It was a sad end to Mew Choo’s run in Beijing although she had already made history by becoming the first Malaysian woman’s singles to qualify for the Olympics.

When I watching the second match, nearly heart attack. But what a waste for Wong Mew Choo, I was hoping can see for another match by both of the players. Really nice game.