“Back home in Korea they say I am too innocent looking, so that is why I decided to wear this ear-ring and look a bit more aggressive looking. No, this was not given by my girlfriend or any other girl. I bought this on my own. Anyway, I will have to take it off soon when I go for my compulsory army training (in February). You cannot wear such things in the army.” – Park Sung Hwan (Korea) when asked about his ear-ring

“I woke up this morning with my body aching all over. I was prepared for a three-set final but it turned out to be an easy final. I have proved that the Putra Stadium is a happy hunting ground for me.” – Lee Chong Wei (Malaysia) after retaining his title

“If all goes to plan, I am expected to meet (Lee) Chong Wei in the quarter-finals in the Korea Open. Let’s see how things go but I hope I don’t play as badly as I did against him in the final here.” – Park Sung Hwan (Korea)

“I am told the weather in Korea is extremely cold now..-6 degrees celcius. I hope the weather will not spoil things for me there.” – Datuk Lee Chong Wei (Malaysia)

“Malaysia is very special to me. The Malaysian audience make me feel very at home. I just feel that everybody likes me. I have very fond memories of Malaysia after I won here last year and it is no different now.” – Tine Rasmussen (Denmark) after her 21-17, 15-21, 21-16 win over top seed and world number one Zhou Mi in the women’s final

“We were patient and knew we had to play a patient game to match the Koreans who are known for their speed and attacking game. Now we have faith in ourselves to look forward for more things to come for us after a disappointing 2008.” – Nova Widianto after partnering Liliyana Natsir to win the mixed doubles title 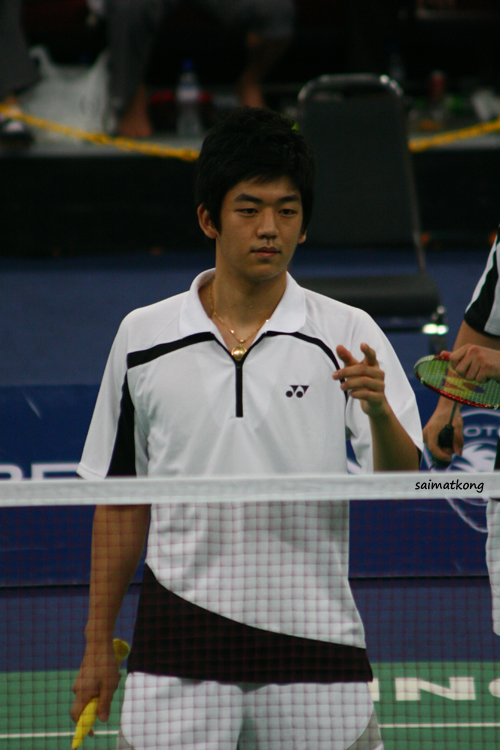 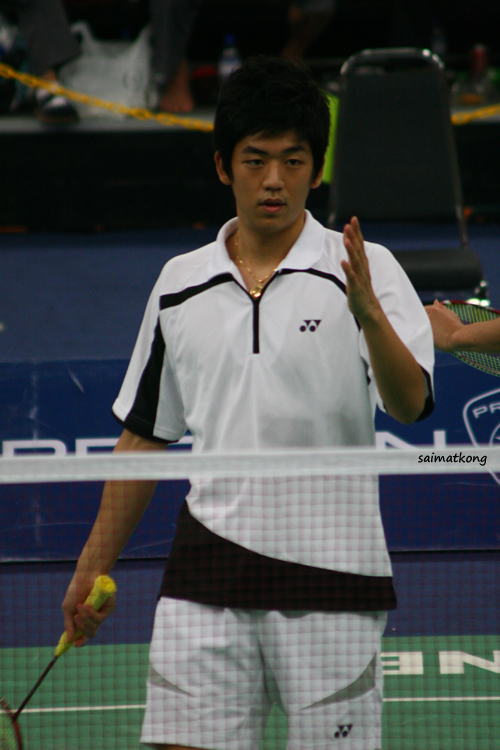 World number one Chong Wei had continued to show his prowess on home ground, playing to the gallery to nail his fifth Malaysian Open title win a thumping 21-14, 21-13 win over South Korean Park Sung-hwan.

The victory in just 39 minutes was the easiest of the lot in his five home Open triumphs. The prize money of US$15,000 was an early ang pow cheer for the Chinese New Year.

“It is never easy to win at the Putra Stadium. The Malaysian players are said to be jinxed here,” said Chong Wei.

Giving thanks: Lee Chong Wei goes down on his knees to celebrate after clinching the winning point. He follows it up by kissing the ground. Then, he walks up to shake hands with Park Sung-hwan.

“And after winning the Malay­sian Open for the second consecutive time in this stadium, I had to kiss the ground on which I stood. But the win was easier than I expected.

“I woke up this morning with pains all over the body. It has not been an easy week for me but I psyched myself up … I did not want to disappoint anyone today.

“It feels great to win the Malaysian Open for the fifth time. If my body is willing, I will be out to set a new record.”

The player who won the most number of eight Malaysian Open men’s singles titles was Wong Peng Soon.

The win for Chong Wei yesterday also showed that he was getting more comfortable with his status as the world number one. He also emerged as a convincing winner of the inaugural Super Series Masters Finals in Kota Kinabalu last month.

“There was so much burden on my shoulders after the Olympics in Beijing (where he won the silver).

“I had to handle the fame that came with the many awards that I received, including the Datukship,” he said.

“I think, that was why I struggled for half a year. It was not easy to shrug off the pressure. Now I feel more confident of myself. I guess, that was why I was so happy to have won the title today even though I had won it four times before.”

Chong Wei’s two main goals this year are to end his title drought in the All-England and to become the first Malaysian champion in the World Championships.

And he is aware that the stumbling block is China’s Lin Dan.

“There is no way out of this. I have to beat Lin Dan if I want to win these titles. I will work hard to achieve these,” he said.

Chong Wei dedicated the win to his coach, Misbun Sidek, who turned up against the doctor’s order to rest.

“He is recovering from lung infection but he still turned up to help me. I admire his dedication in coaching me. This win is certainly for him,” said Chong Wei,

Chong Wei’s next stop is the Korea Open next week and he has a wish: “I hope that I will not get sick there like last year. The temperature there is minus six … I don’t like cold weather.”

For the 25-year-old Sung-hwan, it was the second time that he lost to Chong Wei in the final after 2004.

“He was too good at the front of the net today and I just could do nothing about it,” said a dejected Sung-hwan.

“I may meet Chong Wei again in the quarter-finals of my home tournament next week and I will not play as I did today.”