Home » Blog » How not to waste petrol or save petrol in the recent petrol price hike?

How not to waste petrol or save petrol in the recent petrol price hike?

NEW YORK (CNNMoney.com) — With all the worry over fuel prices, you’d think drivers would do whatever they can not to waste gas. But look around and you’ll see lots of them tooling around as if they owned their own tanker fleet. One of them might be you.

Here are six ways drivers typically waste gas on every

1. Racing away from green lights

When the light turns green, you don’t have to take off as quickly as possible. That pedal under your right foot is called the “gas pedal” for a good reason. The more you press down on it, the more gas you’re pumping into the engine.

2. Racing up to red lights

When you’re driving down the street, and you see a light red light or stop sign up ahead, you should lay off the gas sooner rather than later.

There’s no point in keeping your foot on the gas until just before you reach the intersection. Let off the pedal sooner and give your engine a rest as you coast to the stop while braking gently. As an added benefit, your brake pads will last longer, too.

By themselves, these first two tips can improve your fuel economy around town by as much as 35 percent, according to tests conducted by automotive information Web site Edmunds.com.

3. Confusing the highway with a speedway

Even if it doesn’t involve hard acceleration, speeding wastes gas. The faster you go, the more air your vehicle has to push out of the way. It’s like moving your hand through water. The faster you try to move your hand, the harder the water pushes back.

Tailgating is a bad move for many reasons. First of all, it’s unsafe. You reduce your ability to react if the car in front of you slows or stops. It also means you have to pay ultra-close attention to that car which reduces your ability to scan for other hazards ahead of you and to the sides.

And tailgating wastes gas. Every time the driver ahead taps his brakes, you have to slow down even more than he did. (That’s because you can’t react immediately so you have to slow even more because you’re slowing down later.) Then you accelerate again to get back up to speed and resume your bumper-buzzing routine.

Hang back and you’ll be safer – plus you’ll be able to drive more smoothly and use less fuel. A good rule of thumb is to allow two seconds of space between your car and the one ahead. You can figure that out by counting off two seconds after the car in front of you passes an obvious landmark like an overpass.

Idling, meanwhile, burns about a half-mile worth of gas every minute, according to the California Energy Commission. That’s why hybrid cars shut down their gasoline engines whenever they stop, even for a moment.

Now you don’t want to shut your engine down for every little stop in your regular, non-hybrid car – it’s not designed for that – but if you’re waiting for someone to run in and out of a convenience store, turn off the engine.

And don’t go through the drive-through at fast food restaurants. You’re already paying enough for the oil in those chicken nuggets.

Bonus tip: Don’t idle your engine to let it warm up before driving. It does your engine no good and it wastes gas. Instead, start driving right away, but drive gently until the engine is warm.

For really short trips, take advantage of the opportunity to get some exercise. Try walking to the store instead of driving. You can save gas and burn a few calories instead.

If you can’t hoof it, save up your errands. A lot of short hops that let the engine cool down at home between trips can use twice as much gas as starting the car once and making a big sweep to all your stops, according to the U.S. Department of Energy.

Go to your farthest destination first so your engine has a chance to reach its optimal operating temperature. Then make your other stops on the way back. With the engine warmed up, the car will restart easily and run efficiently all the way home.

The best way to save your petrol fuel is do not use car, use trolley. Found this picture in TheStar Thumbnail. Haha, quite interesting way of transport. 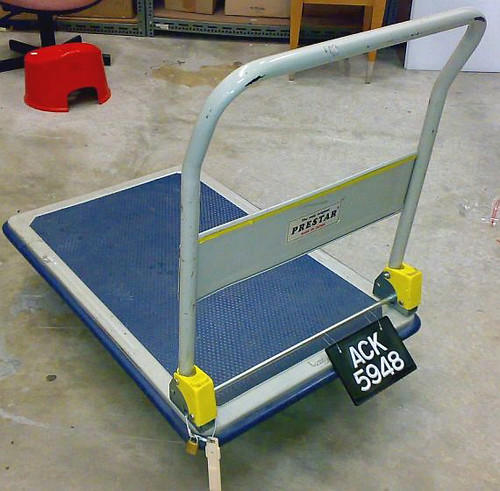