I have received email about this Chili few times and decided to share it to you. Some may find it disgusting. Haha.

These are actual peppers from a garden. They are called ‘Peter Peppers’.. 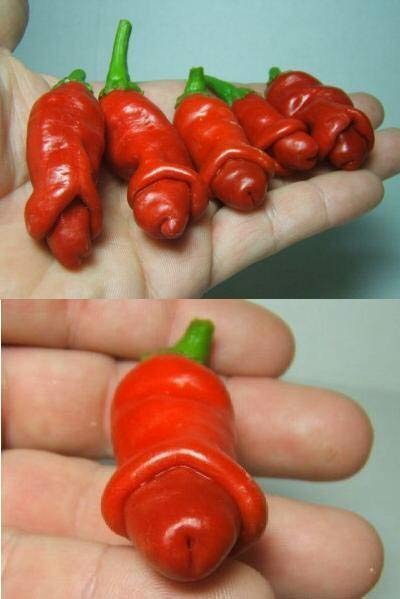 The world’s most offensive-looking plant

When I first saw its picture, I thought it’s just another photoshopped hoax, but digging deeper, I was surprised to discover that it’s a real plant, usually called the Peter Pepper, scientific name capsicum annuum var. annuum ‘Peter’.

It’s native to Louisiana and Texas …

It’s been called many other names, including Chilli Willy and Penis Chilli; and has been judged “Most Pornographic Pepper” by Organic Gardening Magazine.

Not surprising, since it looks like so: Apparently it has always been grown more as an ornamental thing, rather than to be eaten, although it’s perfectly edible.

By the way, a farmer who specialises in growing them, says they can grow up to 18″ long!

Sort of brings a tear to your eyes, doesn’t it?