Hailed as the Asia’s Biggest Race, the Merdeka Millennium Endurance Race (MME) is one of the most challenging and demanding race for cars, drivers and teams alike. It’s where sheer determination and unrivaled skills thrive amid a grueling battle to clinch the inaugural championship title.

Honda Malaysian Racing Team (HMRT) comprises of 22 Honda associates and three drivers of humble backgrounds but each with zealous passion for motorsports and a tireless devotion to toil on the race car beyond their normal work responsibilities.

Returning together with the Type R to compete in the Class A Championship are its drivers Eddie Lew Kar Wai, Aaron Lim and Rueben Wong.

The Merdeka Millennium Endurance Race is just a month away and the Honda Malaysia Racing Team (HMRT) is working intensely on the Civic Type R which competed last year. The 12-hour race which starts at midnight is one of Asia’s most demanding endurance race. This is the 8th year Honda Malaysia is participating in the 12-hour MME races.

The MME race is not just about speed and strategies but also the durability of the finely tuned race machines, stamina of the team and most importantly, the teamwork and perseverance of the teams. Racing is in Honda’s DNA. It’s gonna be exciting during this 12 hour long MME! I’m gonna watch it live @ Sepang this Merdeka!

On top of that, there’s a contest for you in conjunction with this Merdeka Millenium Endurance Race, it’s “Honda Racing Ultimate Challenge”
Why should you join in this contest? Besides winning exciting prizes you also can prove that you have the challenging spirit to be the ultimate Honda Racing fan. 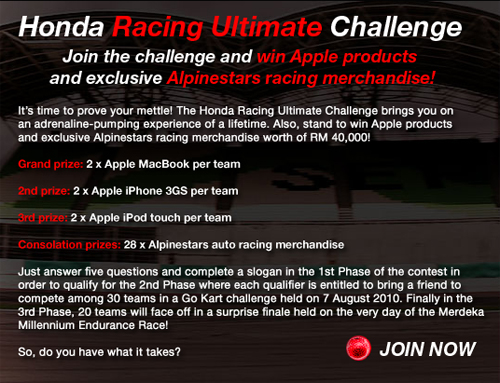 TO JOIN: Answer a quiz
Answer 5 questions on the contest page & complete a slogan.
Shortlisted participants will be notified to proceed to the next challenge.
No prizes but you might get shortlisted for the Go-Kart racing)

QUALIFYING: Go-Kart Endurance Race (7th Aug)
Shortlisted participants to select ONE friend to form a TEAM. 20 teams with the most laps completed in the Go-Kart race will proceed to the FINAL CHALLENGE.