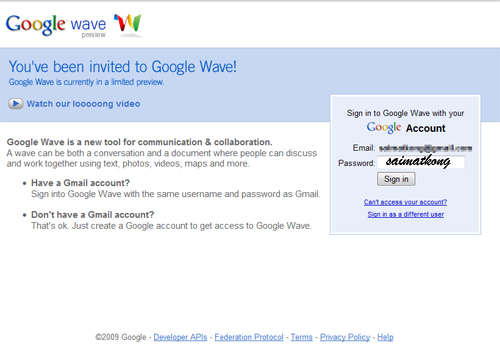 Google Wave is an online tool for real-time communication and collaboration. A wave can be both a conversation
and a document where people can discuss and work together using richly formatted text, photos, videos, maps, and more.

What is a wave?
A wave is equal parts conversation and document. People can communicate and work together with richly formatted text, photos, videos, maps, and more.

A wave is shared. Any participant can reply anywhere in the message, edit the content and add participants at any point in the process. Then playback lets anyone rewind the wave to see who said what and when.

A wave is live. With live transmission as you type, participants on a wave can have faster conversations, see edits and interact with extensions in real-time.

Google Wave is a self-described “personal communication and collaboration tool” announced by Google at the Google I/O conference on May 27, 2009. It is a web-based service, computing platform, and communications protocol designed to merge e-mail, instant messaging, wikis, and social networking. It has a strong collaborative and real-time focus supported by extensions that can provide, for example, spelling/grammar checking, automated translation among 40 languages, and numerous other extensions. Initially released only to developers, a “preview release” of Google Wave was extended to 100,000 users in September 2009, each allowed to invite twenty to thirty additional users. On the 29th of November 2009, Google accepted most requests submitted soon after the extended release of the technical preview in September 2009, these users have around 8 invites to give.

Want to get yourself a GoogleWave account? How to get free Google Wave invite? 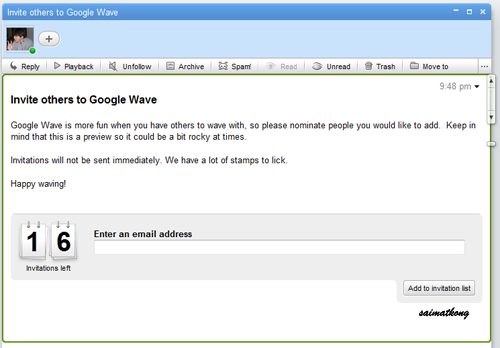 If you want to be in the wave too , just simply ReTweet about this article with the url (So that other ppl know about it too) and you will get your Google Wave account right away! I have 16 Google Wave Invitations to give away for free now! Get yours here.

That’s it! Of course, I want you to follow me on Twitter @saimatkong to get latest updates and ReTweet (RT) any articles you like here too.

*Google Wave invite delivery could be delayed for few days. I will inform you if you get the Google Wave invitation from me and please be patient and wait for some time to receive yours.