Free 1Malaysia Email that need RM50mil investment? Wow that’s such a big amount of money that could be invested into something more useful to the Malaysian rather than giving email which we could easily singup from Gmail or Hotmail with plenty of storage?

The question everyone asking is, why do we need this when any service providers will give you a free e-mail account. Isn’t it true?

I really agree with Chief Minister of Penang, Lim Guan Eng to give free WIFI instead of Free Email which is not really benefit to the citizen.

CM Lim said, ‘Give free wi-fi, not free email. What’s the point of free email when we can get them from Yahoo, Google and Hotmail?’ He also expressed his concerns regarding privacy issues.

1Malaysia e-mail accounts for Malaysians over 18

PUTRAJAYA: Malaysians aged 18 and above will be assigned an e-mail account each to receive statements, bills and notices from the Government.

Datuk Seri Najib Tun Razak, who announced this yesterday, said the 1MY E-mail initiative would allow “direct and secure” communication between citizens and the Government while enhancing the delivery of government services to consumers and businesses alike.

Tricubes Bhd is collaborating with Microsoft to develop the 1Malaysia E-mail project.

The company will spearhead the private RM50mil investment that also includes the development of a web portal as a one-stop centre for government services providing value-added services such as social networking, checking of bills online and payments.

“Hopefully, we can get it ready by July,” he told a press conference at the fifth progress update of the Economic Transformation Programme here yesterday.

Khairun said the portal was different from the MyEG website, which focused on the payment of bills and summonses, as it would allow interaction between people and the Government.

The Performance Management and Delivery Unit, responding to queries said the 1Malaysia E-mail would not be made compulsory. 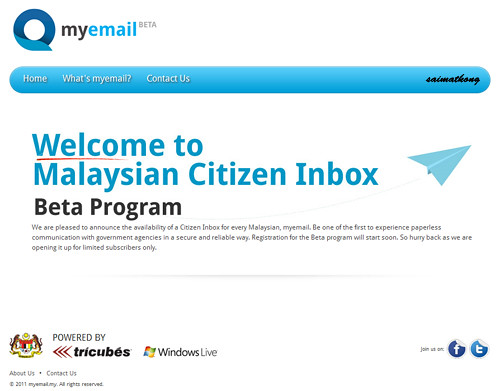 KUALA LUMPUR, April 20 — Tricubes Berhad has launched the myemail.my “Citizen Inbox” service with registration to begin at the end of April despite a furore whether the RM50 million project is necessary for citizens to communicate with the government.

The government has already stated the service is voluntary and no public funds will be used to finance the project.

Tricubes is using Microsoft Corp’s Windows Live platform for the email service, which will offer 25GB of mailbox space. The service will also allow users to create documents using Microsoft Office products, which is the most widely used office suite software worldwide.

Windows Live is the collective brand name for a set of services and software products from Microsoft, part of their software plus services platform.

The features offered by Tricubes are already available in Microsoft’s free Hotmail service.

The government has stressed that it is not funding the private-sector initiative despite inviting bids for the project last November.

However, project developer, Tricubes, is in danger of being delisted from the stock exchange for financial irregularities.

The website domain was registered by Tricubes on March 10, 2011 for a year.

“Myemail is an email messaging service open to all Malaysians. If you are a citizen, then you are entitled to a myemail account. Registration is simple and approval is within 24 hours.

“With a myemail account, you can get the latest news or even events by the government directly to your inbox. Be the first to know of new government initiatives, services or policies,” the website added.

As of 5pm, the hashtags #1malaysiaemail and #Tricubes are still among the top ten Malaysian topics on microblogging site Twitter, where Malaysians have ridiculed the email plan since it was announced yesterday.

The 1 Malaysia email project is not the first free email project in the country. WauMail was officially launched on July 12, 1999 and was available in four languages — Bahasa Malaysia, English, Mandarin and Tamil.

WauMail was a joint-venture between Technology Park Malaysia and Intelliweb Sdn Bhd. Its website was hacked in 2001 when it had some 600,000 users. It was later turned into a paid email service in 2002. At present, it no longer exists as an email service.

I remember that I have discussed with my ex-colleague about 1Malaysia.com and we came out with a funny yet captive name that’s 1Manusia.com which we think it’s greater? Now, I’m giving you free @1Manusia.com email for FREE too!

If you want to get this free email account, you just have to follow me in my twitter and Facebook. Then just leave me a message and your email address will be created right away! Of coz this is done out of good will and can’t compared to the Free 25GB provided by myemail.my, so don’t overload the free email service that I provide k! =)