Quote : “BUCC general affairs manager Paul Fernandez said they decided to reopen the road out of goodwill to facilitate the traffic study as requested by the Mentri Besar.” 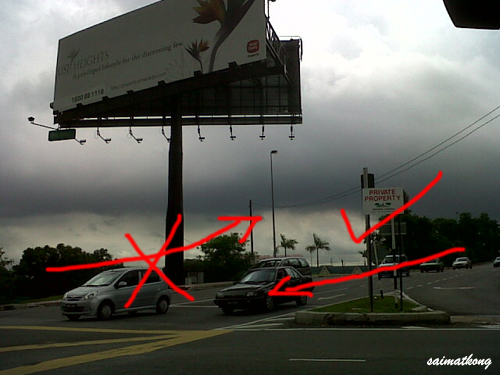 Why why why?? Why open for two weeks? What’s the use open Jalan Tanjung for two weeks? If good will then open until the proposal of widening Jalan Tanjung to a four-lane road from its current two-lane road completed by MBPJ. Hmm sumore open but only one way… Then this road will be close again before Christmas?

AFTER a late Monday night fiasco between the various parties involved in the re-opening of Jalan Tanjung in Bandar Utama, Petaling Jaya, the road was eventually reopened early yesterday morning.

A week after Selangor Mentri Besar Tan Sri Abdul Khalid Ibrahim made the announcement to re-open the road to ease traffic congestion, the Bandar Utama City Corporation (BUCC) had granted permission to the Petaling Jaya City Council (MBPJ) to remove the barricades on Monday night.

In an unexpected turn of events, the Bandar Utama Residents Association (Bura) representatives also showed up in front of the 1 Tech Park to prevent the road from being opened.

Bura chairman Datuk Manpal Singh had informed those present that they had at 6pm on Monday night filed a writ summons and application for injunction against BUCC and MBPJ to prevent them from opening the road.

Making their stand clear: The banners put up by Bandar Utama Residents Association around the Jalan Tanjung area calling for the road to be closed.

It was scheduled to be opened at 9pm but MBPJ officers and BUCC representatives debated the legality of opening it for more than an hour before deciding against it.

In the end, BUCC relented and re­opened the road at about 2.30am.

BUCC general affairs manager Paul Fernandez said they decided to reopen the road out of goodwill to facilitate the traffic study as requested by the Mentri Besar.

He said all legal matters would go ahead and they would attend the hearing fixed for Dec 8 at the Shah Alam High Court.

Meanwhile, the joint action group against the road closure headed by Tropicana Residents Association Mohamed Shukri Zain called for an emergency meeting yesterday morning at the Tropicana Golf and Country Resort to discuss the matter.

The group decided that they too would file an application for an injunction by Thursday but would discuss it with their solicitors on who to file it against.

About 50 people attended the meeting including those from Tropicana Residents Association, Riana Green, Citra Damansara, Palm Springs and Casa Tropicana.

During the meeting, some of the issues raised by the representatives of the joint action group included:

·The application of injunction filed by Bura, which would go against the Mentri Besar’s request to reopen the road to facilitate a traffic study;

·The setting up of a booth at the 1 Utama shopping centre by Bura to collect signatures for their petition to keep the road closed, raising questions to the credibility of the signatures collected; and

lThe putting up of banners along Jalan Tanjung to protest the reopening of the road by Bandar Utama residents, which is seen as in bad taste.

Meanwhile, the Selangor government thanked BUCC for re-opening Jalan Tanjung in Bandar Utama as agreed with the state, MBPJ and Dijaya Corporation at the meeting on Nov 22.

Khalid said as agreed at the meeting, the reopening of the road for two weeks would not prejudice the ongoing legal disputes between BUCC and Dijaya.

The move will now allow MBPJ to study the feasibility of widening Jalan Tanjung to a four-lane road from its current two-lane road.

He said this study was not limited to the widening of Jalan Tanjung and was part of a holistic traffic dispersal study to other access routes in search of long-term solutions to the problem of bad traffic conditions in Dama-nsara.

Apart from the reopening of Jalan Tanjung, MBPJ plans to implement the short-term measure to ease traffic congestion which includes reassigning the U-turn at the junction of Jalan Tropicana Selatan and Jalan Hilir Bandar Utama near a nursery further up in the area; and building a road to link Jalan PJU1A/1 in Ara Damansara to Persiaran Tropicana.

The state is committed to finding long-term measures to address the problem and will be calling all developers in Damansara to take part in the process.