So peeps , drive safe and slow! Don’t against the law! 🙂 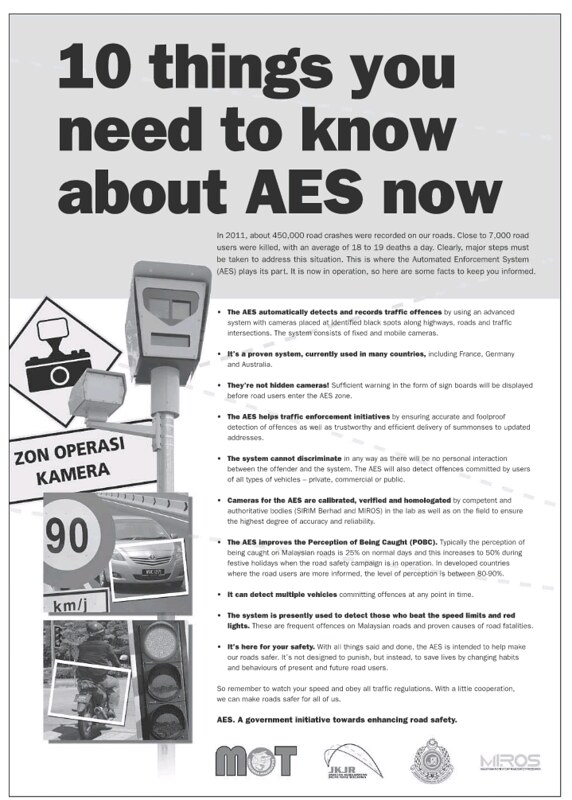 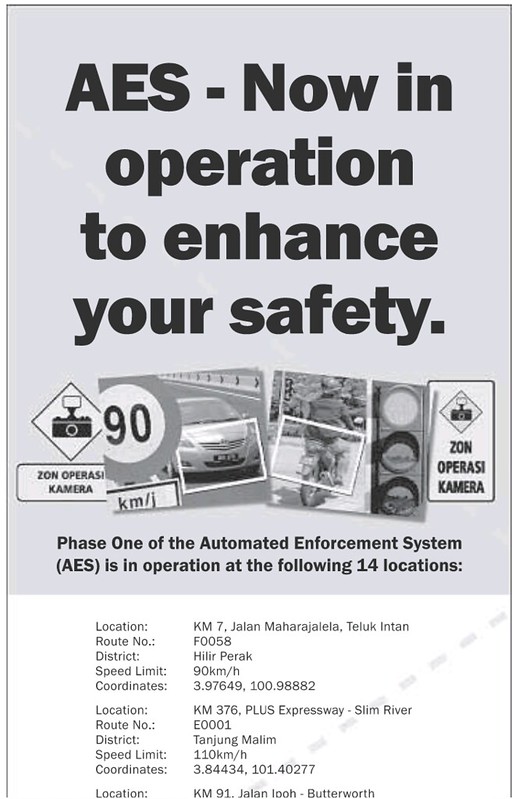 PETALING JAYA: Errant road users be warned; from today the Automated Enforcement System will begin operating at 14 “blackspots” to nab drivers who break the speed limit and jump traffic lights.

For the first phase of the AES, 14 cameras have been installed in Perak, Selangor, Putrajaya and Kuala Lumpur. Ten are to catch speed limit breakers and four to catch those who jump traffic lights.

More cameras will be installed at 817 “blackspots” in the second phase, completing a nationwide implementation of the AES.

Road Transport Department (JPJ) director-general Datuk Solah Mat Hassan said the implementation of the AES was “a serious move” by the Government to reduce the number of road fatalities.

“Hence, the AES cameras are installed at locations identified as accident-prone areas,” said Solah in a press statement.

He said the public could check where the AES cameras are on www.jpj.gov.my, adding that road users would also be able to know when they are at AES operation zones through signboards.

“By knowing the location, road users will be more careful at these spots and will drive according to the law. It will reduce the number of deaths and our objectives to ensure the safety of road users will also be met,” he said. “The public should see the implementation as a way to educate road users, not as a means to give JPJ extra power to issue summons.”

He said AES camera warning signs for no-speeding areas would be visible two to three kilometres before the cameras.

Solah said images captured by the AES cameras would be sent automatically to the AES control centre and the vehicle registration numbers of the alleged offenders would be cross checked with JPJ’s database, before a summons notice is sent to the vehicle owner.

“If the captured images do not match with the vehicle registration details on JPJ’s database, further investigations will be carried out. Offenders will receive their summons notices within five days of the date they violate traffic rules.

“However, if the registered owner is not the driver of the vehicle at the time of offence, they can submit the driver’s details to JPJ 30 days from receiving the summons notice,” Solah said. “If they choose to be present in court, they can do so at the time and date specified on the notice.”

Solah said those who have received the notice can call the AES Control Centre for enquiries at 03-7846 4400 for offences committed in Perak and 03-7628 8268 for offences in Selangor, Putrajaya and Kuala Lumpur.

Leeway given to drivers under Automated Enforcement System

PETALING JAYA: When the light turns amber, you have just two seconds before it turns red and the cameras catch you committing a traffic offence under the Automated Enforcement System.

This allowance is given in consideration of the “human element” in the event that you are not able to stop immediately when the light turns amber.

Under the AES, you are also given a leeway of 10kph beyond the speed limit, according to Road Transport Department director-general Datuk Solah Mat Hassan.

For example, if the speed limit is 110kph, you will only be “captured” on AES camera if you exceed 120kph, he told a media briefing here yesterday.

“Thus, offenders can no longer argue they only drove a couple of kilometres over the speed limit or that the traffic light turned red halfway.”

Solah also said the system started on Sunday with 14 cameras installed at accident-prone areas in Perak, Selangor, Putrajaya and Kuala Lumpur 10 to catch speed limit breakers and four to nab those who beat the red light.

Solah said that cameras would be installed at 817 blackspots nationwide in the next one year.

He said the cameras, with an 11 megapixel resolution, could capture clear images of vehicles even when they were moving at high speed.

“The images captured will be sent automatically to the AES control centre and the vehicle registration numbers of the offenders will be cross-checked with the database of the Road Transport Department before a summons notice is mailed to the vehicle owner.

“Offenders will receive their summons notice within five days of the date they violated traffic rules. They are given two months to pay their RM300 compounds. They can be hauled to court if they refuse to pay up,” he said.

Solah stressed that the AES was not aimed at issuing summonses, but to educate people to be good road users and reduce the number of deaths due to accidents in the country.

As such, he said, signages were put up to give ample warning on the presence of cameras.