Home » Blog » Are you the murderer 殺人犯? Don't kill me pls…

Are you the murderer 殺人犯? Don't kill me pls…

How do you solve a MYSTERY when you can’t keep track of the CLUES?
How do you investigate a CRIME when you become the SUSPECT?

LING Kwong is a 40 year old, self-assured Chief Inspector of Police. He solved numerous difficult cases on his own, has a flawless track record, and is soon to be promoted to Superintendent of Police. Everyone sees him as the future head of the Hong Kong Police Force. Ling has a perfect family – a beautiful, gentle wife, a charming son and a posh lifestyle. In every sense, he is as enviable as he is successful.

His perfect life takes an abrupt turn when he wakes up after fainting in a dilapidated building, on one of his operations. He wakes to discover his short term memory damaged, and is more shocked to find his best colleague killed in the same building – BLOODY HOLES all over his body, mercilessly blood-let by an ELECTRIC HAND DRILL!

Ling’s colleague is the third victim of this series of “bloodletting murders”. Using the most inhuman means, this serial killer makes each victim witness his own slow death, in supreme terror and unimaginable pain! The extreme cruelty of the murders appalls even the most experienced policemen, and after each killing, the murderer simply disappears and leaves no trace at all to the clueless police.

At the height of his life, Ling encounters this most vicious murder throughout Hong Kong’s crime history. He must catch the killer at all costs and to avenge his friend’s death. But as Ling sift through the clues of the murders, he finds that all the evidences are pointing toward himself as the murderer! The deeper he tries to dig into the truth, the more suspicious he becomes!

All this time, Ling’s short term memory continues to desert him. He is losing the last trustworthy evidence – himself. Ling is being pushed to the edge of madness! Is he really the murderer – or not? 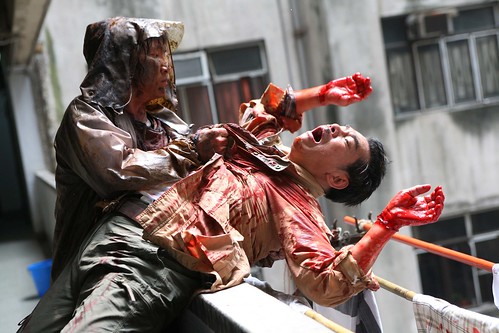 Some of my personal comments:

If you have not watch it then go and have the experience it yourself and you will feel it. I have watched it and feel a bit uneasy and uncomfortable now. Don’t know how to tell the feeling.

Watch it for yourself. Some ppl complaining about the movie but I think it’s a good movie and the actors are all good! Good job. Haha. When you watch it you will feel yourself like Aaron Kwok. In the end you will really feel like “Cha do” la. In the movie there’s some funny part as well. Put close attention to the kid! That’s all I would say.