Went to Stadium Putra Bukit Jalil during the quarter final and semi final for Malaysia Open 2011. Quite disappointed because of Lin Dan walkover and let his team mate Chen Long quality to semi final. 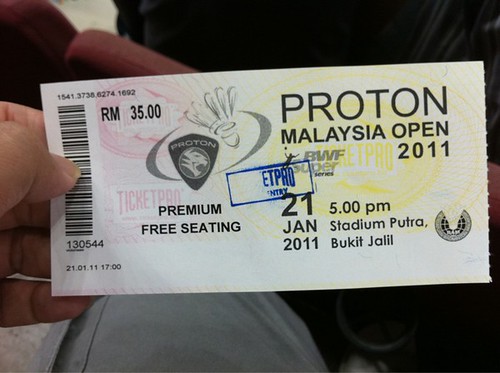 It’s due to he suffered a recurrence of an old injury on his left abdominal area, but I supposed is one of the China tactic to ask Lin Dan to walkover to give way to Chen Long? Hmm just too bad can’t witness Lee Chong Wei vs Lin Dan again. It will be a great game if they were to meet up.

On friday I still can see Misbun appear as Lee Chong Wei coach. When Misbun Sidek entered into the arena, there’s thunderous applause and support from the crowds. Hope Misbun will continue to support our Malaysian players!

I’m glad that Lee Chong Wei grab the 7th Malaysia Title and hope he will continue to make Malaysia proud!

Checkout the video I posted for Lee Chong Wei vs Chen Long on Semi Finals.

The Malaysian was in full control in the first set and had his opponent scrambling to return shots from all corners of the court.

Chong Wei was especially deadly at the net, winning numerous points with his deft touches.

The second set started just like the first, with Chong Wei racing to a 17-7 lead. But just when it looked like a thrashing, Taufik put up a gallant fight-back to narrow the deficit to 17-15.

However, Chong Wei regained his composure and wrapped up the set and match 21-17 in 18 minutes. 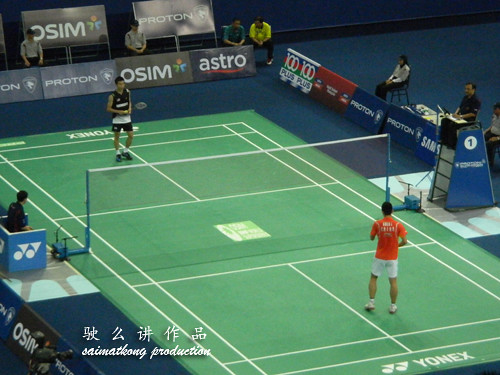 IT was a fun day for shuttler Lee Chong Wei when he checked into the Malaysia Open final in ruthless fashion to keep alive the hope of becoming home champion for the seventh time.

Yesterday, the world number one crushed Chen Long of China 21-9, 21-9 in a lop-sided 39-minute semi-final match in front of vociferous home fans at the Putra Stadium.

He will play against an on-fire Taufik Hidayat of Indonesia in today’s final and based on the current form of these two players, an explosive match is on the cards.

Yesterday, Chong Wei, boosted again by the presence of his coach Misbun Sidek, who was smartly dressed in a chequered shirt, showed no mercy to Chen Long.
Turning on the style: Lee Chong Wei returning a backhand shot to China’s Chen Long during their semi-final match yesterday. Chong Wei won 21-9, 21-9.

And Chen Long, despite an extra day’s rest after enjoying a walkover from injured compatriot Lin Dan in the quarter-finals on Friday, was unable to keep up with the fiery pace.

The Malaysian never took his feet off the pedal although he had a big lead over Chen Long throughout the match.

And at one stage, he even did a little jig after saving an almost impossible deep baseline return from Chen Long and it brought out a big uproar from the delirious fans.

Chong Wei said he went into the match with the intention of crushing Chen Long’s spirit from the start. “He is China’s upcoming youngster and it is dangerous to give him room to build up his confidence. I just went all out,” said Chong Wei.
Taufik Hidayat.

“I was very confident after taking the first game. All my strokes and counter attacks worked well for me and I just continued to enjoy myself. It felt really good.”

On his match against Taufik today, he said: “It is a familiar face but his condition seems to be better here. I will be ready. This is my homeground and I am determined to go out there and win my seventh Malaysia Open title.”

Taufik, who won the 2000 Malaysia Open, is hoping to turn back the clock.

“I wish that I can go back several years. It will put me in a better position to challenge Chong Wei,” said the 30-year-old Taufik, who is one year older than the Malaysian.

“He is on top of his game as I was at one point of time. I have lost to him many times over the last two years but I beat him at the last World Championships.

“I feel good right now and I am hoping to get off to a great start this year. I will give my best against him and see what happens.”

Taufik was pleased with his superb 21-15, 21-19 win over compatriot Simon Santoso yesterday.

“I was a class above him in the opening game. I had a good lead in the second but I took it easy and Simon caught up. Fortunately, I made up for my hastiness to end the match early,” he said.

“It will be a different ball game against Chong Wei tomorrow and hopefully, I will be able to raise my game even higher,” added Taufik.

Despite the disappointment over Chen Long’s meek defeat yesterday, China can still afford a big smile. They are assured of three titles today as it will be all-China finals in the women’s singles, women’s doubles and mixed doubles events. 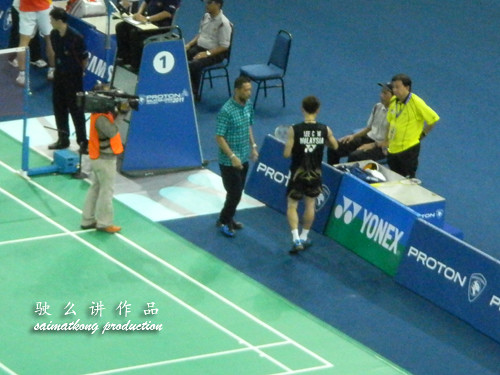 And due to this, the BAM’s council, who will meet today, is unlikely to make any major decision.

However, according to one of the council members yesterday, they are determined to get Nadzmi to make a stand over the whole matter surrounding Misbun.

Yesterday, Nadzmi said that Misbun had sent a text message to him, saying that he would prefer to meet after the Malaysia Open, which will end today at Putra Stadium.

“He wants to stay focused on the Malaysia Open and I respect that. I will meet him after that,” said Nadzmi.

Misbun pulled a shocker when he tendered his resignation on Dec 31. However, he has been asked to re-consider his decision by the BAM exco.

Misbun has not made up his mind on his status but he has showed up to support and coach world number one Lee Chong Wei since the second day of the home competition here in Bukit Jalil.

There were high hopes that Misbun would meet Nadzmi before today’s council meeting so that the 30-member council members could be briefed on whether Misbun wished to retract his resignation letter and if he did, what are the conditions he wanted for his return.

Nadzmi said that his main objective today is to brief the council on Misbun’s decision to resign. “I want the council members to know want had happened. It is important to engage them and this is precisely why the meeting is taking place,” he said.

When asked whether any decision would be made today, Nadzmi said: “We will deliberate and discuss on Misbun’s resignation matter. But I promise that there will be an amicable decision on this matter.”