BWF World Championships 2013 Final – Lin Dan vs Lee Chong Wei. There will be an awesome showdown between Malaysian Lee Chong Wei and China’s Lin Dan later of the day! It’s the most awaiting match all time round! 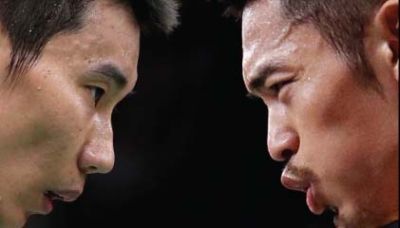 Watch the Badminton Live Stream for Free at Guangzhou for the World Championship 2013 Final!

Dato Lee Chong Wei walk over and lost to Lin Dan due to injuries! 🙁

Don’t worry Dato Lee, you are still world no. 1 in Badminton!

World No.1 Lee Chong Wei set up a final showdown with Lin Dan after beating Du Pengyu in the semi-finals. – IZZRAFIQ ALIAS / The Star

THE super showdown between Malaysian Lee Chong Wei and China’s Lin Dan is on.

On Saturday, top seed Chong Wei came through a titanic battle against Du Pengyu of China with a 20-22, 21-12, 21-15 win in 71 minutes to set-up a mouth-watering clash with nemesis Lin Dan in the men’s singles final of the World Championships.

It will be Chong Wei’s 31st encounter against Lin Dan over the last decade and he will be hoping for only his 10th but most meaningful win.

Chong Wei is bidding for his first world crown while Lin Dan, who is making a comeback after winning the London Olympic gold last August, is gunning for his fifth crown.

Chong Wei had a hard time against Pengyu but he said that he had conserved enough energy for the epic battle against Lin Dan on Sunday.

“The opening game (against Pengyu) was crucial but I let it slip through my fingers. I tried to make up for my slow start but could not convert them into winners in my eagerness to win,” said Chong Wei.

In the opening game, Chong Wei was slow off the blocks and gave away points by making weak returns and poor judgments.

Halfway through the match, he stepped up gear but his chase came a little too late.

In the second game, a fired up Chong Wei bulldozed past a tired Pengyu.

It was a tight battle in the decider but Chong Wei displayed all his years of experience to romp home for a win.

“It looked as though Pengyu just wanted to push me to the limit. He went out for all the shots. I am tired now but I will be fresh for the final tomorrow,” said Chong Wei.

With a burning desire to become the nation’s first world champion, Chong Wei has vowed to show who is the boss in his seventh attempt in the World Championships.

“It is a match that everyone is waiting for. I have been dreaming about this moment for a long time. The time has arrived and I will fight for every point. This is my chance to win. It will be tough but I will be mentally prepared for it,” said Chong Wei, who lost to Lin Dan in his other final appearance at Wembley two years ago.

Lin Dan surprised to be in the final

Lin Dan is well on course for his fifth world title. – IZZRAFIQ ALIAS / The Star

Without any high-level competition for a year, Lin Dan gave a solid performance on Saturday to beat surprise semi-finalist Nguyen Tien Minh of Vietnam 21-17, 21-15 in 49 minutes.

It will be Lin Dan’s sixth final appearance in his eighth World Championships.

In fact, he had also beaten Lee Chong Wei in the 2011 final.

After pulling off some brilliant moves en route to the victory over Tien Minh, Lin Dan was full of praise for his opponent.

“I admire my opponent Tien Minh very much. He is also 30 years old – just like me.

“He is a strong-willed player and hardworking, just like my team-mate Du Pengyu,” said Lin Dan.

“Tien Minh has done well here and I think this is his best achievement in the World Championships. Naturally, I came prepared to tackle him.

“It took some adjustments for me but I managed to keep my composure to win it.

“I have not played in any high-level tournament for a year and it is unbelievable to reach the final again.

“All my efforts have paid off. I did not do much training but I maintained my physical fitness.

“It is great to make a comeback in this manner.”

“Chong Wei is an experienced player and I can see that he is well prepared this time. I think it will be an excellent match for all the fans,” said Lin Dan.