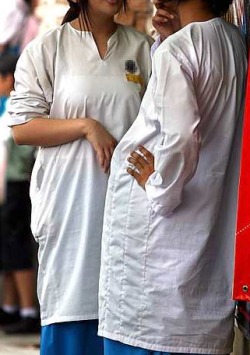 I think that’s stupid plain excuses saying “encouraged rape and pre-marital sex”. Do you think it’s the factor? Is the Baju Kurung really sexy?? Compared to other Country like Japan or Western Country? haha

“The white blouse is too transparent for girls and it becomes a source of attraction,” National Islamic Students Association of Malaysia vice-president Munirah Bahari said in a statement.

“It becomes a distraction to men, who are drawn to it, whether or not they like looking at it,” she said, calling for a review of uniform policy so that it did not violate Islamic ideals.

In multicultural Malaysia, home to majority-Muslim Malays as well as ethnic Chinese and Indians, female students at government schools have a choice of wearing a white blouse with a knee-length skirt or pinafore.

They may also wear a “baju kurung” and a headscarf is optional for Malay students.

Munirah said that “covering up” according to Islamic precepts was important to fend off social ills, including “rape, sexual harassment and even premarital sex.”

“This leads to babies born out of wedlock and, to an extent, even prostitution,” she said.

“Decent clothes which are not revealing can prevent and protect women from any untoward situations,” she said, suggesting that girls wear a blouse of a different colour or with an undergarment.

However, the girls themselves also came in for criticism, with the association saying that some used the white blouse to lure men.

“This is the source of the problem, where we can see that schoolgirls themselves are capable of using this to attract men to them,” Munirah said.

“This could see them getting molested, having premarital sex and all sorts of things.” – AFP

PALOH: The Education Minister dismissed talk that the current uniform worn by girls in government schools, which has been in use for decades, was too “sexy” and that it contributed to rape and other immoral acts.

Datuk Seri Hishamuddin Tun Hussein said the uniform would probably not change much in the next few years.

He said that he personally felt it was unfair to blame the students or their uniforms for sexual crimes committed against them.

“It is unfair to punish women and children for the clothes they wear for the act of the rapist,” he said, adding that he could not allow such stereotyping to continue.

“Clothing is not the main consideration for those who commit despicable acts like these,” he said, in reference to the National Islamic Students Association of Malaysia’s condemnation of the uniform for being too sexy.

The association said the uniform encouraged rape and pre-marital sex.

Hishammuddin said that although he believed that changing the uniforms would not reduce sexual crimes committed against schoolgirls, he would refer the matter to experts within his ministry before making a decision.