Introducing iPhone 3G. With fast 3G wireless technology, GPS mapping, support for enterprise features like Microsoft Exchange, and the new App Store, iPhone 3G puts even more features at your fingertips. And like the original iPhone, it combines three products in one — a revolutionary phone, a widescreen iPod, and a breakthrough Internet device with rich HTML email and a desktop-class web browser. iPhone 3G. It redefines what a mobile phone can do — again. 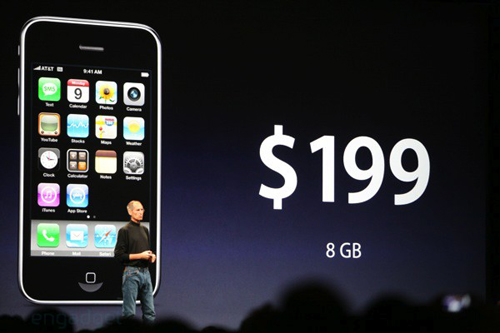 It’s been a long, leak-filled wait, but Apple finally took the wraps off its 3G iPhone. Thinner edges, full plastic back, flush headphone jack, and the iPhone 2.0 firmware — Apple’s taking a lot of the criticisms to heart from the first time around. Obviously 3G is at the forefront, but they’re also making sure it’s available all over internationally, works with enterprises, runs 3rd party apps… and does it all for cheaper.

Apple claims its 3G speeds trounce the competition, with pageloads 36% faster than the N95 and Treo 750 — and of course it completely trounces the old EDGE data. Battery life isn’t getting put out to pasture though, with 300 hours of standby, 8-10 hours of 2G talk, 5 hours of 3G talk, 7 hours of video and 24 hours of audio. GPS is also a go.

Apple is using A-GPS, which supplements regular satellite GPS data with info from cellular towers. WiFi data is also worked into the mix, which should give users a pretty solid lock on where the heck they are on this planet. Unfortunately, there’s no front-facing cam, which syncs with what we were hearing, but is still a little disappointing. Apple hopes to launch in 70 countries this year.

8GB is available for $199, 16GB for $299 — and the 16GB comes in white. Both pricepoints require a contract. Apple will be hitting the 22 biggest markets, including the US, on July 11th. More info after the break.

Update: Just bought an iPhone? Listen up: “Customers who purchased a 2.5G iPhone on or after May 27 and want to swap it out for a new iPhone will be able to do so without incurring an additional handset charge for the new device. They will of course need to turn in their 2.5G iPhone.” And for the rest of you, AT&T says there’s no way to buy it without agreeing to a contract. So sorry. More details here.

* A SIM ejector comes in the box, at last.

* No mention has been made of MMS, video recording or built-in iChat. What gives, Apple?

* On the chatting front, developers will be able to ping a centralized push server with their apps, to keep down battery usage and app overload on phones.

* On AT&T unlimited iPhone 3G data plans for consumers will be available for $30 a month, on top of voice plans starting at $39.99 a month. Unlimited 3G data for business users will be $45 a month, on top of voice. There’s a minimum two-year agreement, but we’re not positive what that’ll look like for those currently enslaved to an AT&T contract — you could be looking at a solid four years of time if you just took the plunge.

* Apple’s new MobileMe service will be coming with the iPhone 2.0 software, bringing push email and contacts for all.

* Apple’s official page is here, and you can watch the new ad here.

Sad to say Apple decided to leave out Malaysia, but the question is why? Why they even include African, Philippines, South Africa but not Malaysia? Isn’t Malaysia Boleh?