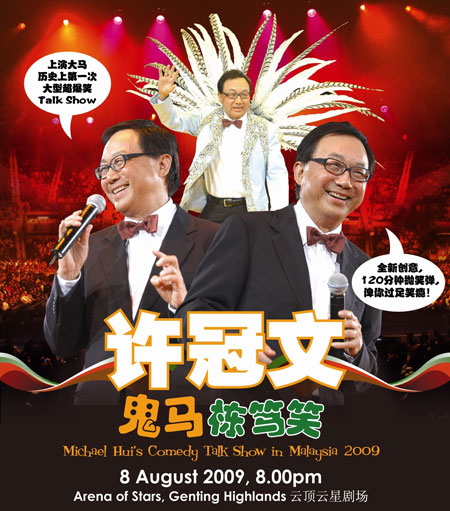 I wanted to go and have a look and experience too but not sure will be laughing there or not. Haha. Or can I host a Comedy Talk Show myself? Coz the tickets is very expensive ler the most expensive tickets is RM360 just to laugh for 120mins. You pay me RM360, I can make you laugh whole day deal? Haha just kidding ler. Check the details below if you are interested.

The comedy genius Michael Hui has never been known for being conventional. Exceptional wit, humor and wisdom are nothing unusual coming from Michael. His acting has always been deemed to amuse, inspire and delight audiences in Michael’s own unique and calculated way.

In 2005, Michael pioneered in hosting two talk shows that were held in the Hong Kong Coliseum. He gave his audience a complete round of entertainment that was received with thundering laughter and applause. His performance that captured 26,000 spectators became the talk of the town. His performances are always sophisticated and suit both refined and popular tastes. He is the trendsetter for such forms of talk shows in Hong Kong.

This 120-minute talk show that has been choreographed for almost a year will soon become a reality in Malaysia. You can expect to see Michael lay on a great show with all-new creative ideas and surprises.