Tomorrow is the last day to submit Income Tax Return

Have you submitted your Income Tax Return for 2007, BE 2007? If not please do so via e-filing or visit the branch. 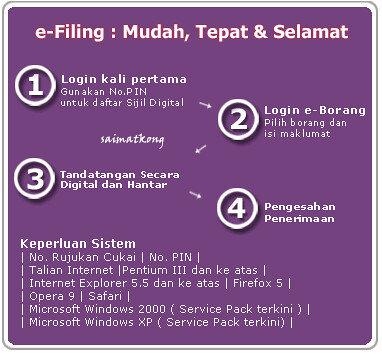 You can do your Income Tax Return via https://e.hasil.org.my/, but I just try to access it’s very very slow now. I think thousand ppl are now rushing to do their Income Tax Return the e-filing way online at the very last minute. Do not wait any longer, submit it now before it’s too late. In addition to that, please be prepared to expect slow loading time and maybe system failure might occur as expected all the people are rushing last minute.

General manager Ding Sing Dir, 57, from Shah Alam, waited at least an hour in front of the computer, trying to access the system, at the IRB branch in Kelana Jaya.

“The system (right now) is no good. It takes up so much time. I thought doing it from the IRB office itself would be faster,” said Ding, adding that he had tried to log in more than five times but was not successful.

Beautician Lynn Chan, 37, was also unable to e-file her form.

“Although they say I can do it at home, I prefer coming here because they have staff to help,” she said.

IRB CEO Datuk Hasmah Abdullah told The Star that the department had increased its 24Mbps Internet connection speed to 60Mbps this year.

“However, the Internet line hit maximum capacity due to a sudden surge of e-Filers submitting their forms,” she said, adding that it caused congestion and led to slow connection between 10am and 6pm.

She said traffic flow was back to normal from 6pm.

“We apologise for the inconvenience. This is to be expected towards the end of filing season and we are prepared for it,” said Hasmah, whose team is monitoring the system around the clock.

IRB branches in Klang Valley are extending their operation hours from 8am to 10pm until tomorrow.